Some time after you have reached character level 3, you will receive a letter with the following message:

Travel to the City of Wayrest. Find Castle Wayrest, whose grounds occupy much of the north side of town. Head inside and speak to Morgiah in the throne room to hear her offer:

"You're trying to track down that letter of the Emperor's, yes? There are very few scandals in the Bay of which I am totally ignorant. I could give you some information, but nothing is without a price, that I know well. I need a champion who does [sic] fear the fire of Oblivion. Are you interested?"

"(Oath), that is a relief to me. Do not ask any questions -- get this letter to a certain high level sorcerer at the Necromancers' crypt, Scourg Barrow in the Dragontail Mountains. Avoid the rift. If you see it, you have gone too far.

They will not be expecting you and will not wait for any introductions. The necromancers feel that death is a reward for the living, not a punishment. Once you have delivered the letter, they would feel no need to guarantee your safety. It is their way. I need the letter delivered and a response from King of Worms in my hand one month from now at the absolute latest. The risks are very high, (player's first name), please do not fail."

If you refuse the quest, it will be impossible to complete the Main Quest, and Morgiah will reply:

"Pity. I will find someone else to help me. But who will you find to help you, I wonder."

As Morgiah said, she needs you to return within a month; this gives you a time limit of 30 days to complete the quest. Her letter must be delivered to the King of Worms, the leader of the ill-famed Necromancers, which reads:

Make any necessary preparations, then travel to Scourg Barrow in the Dragontail Mountains. 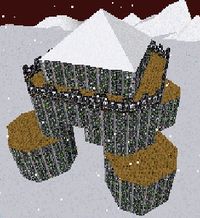 Scourg Barrow, home of the King of Worms

Finding the King of WormsEdit

The Scourg Barrow dungeon appears as a small castle in the wild. The entrance is located at the north wall of the central building structure.

For a list of enemies encountered in this dungeon, see Enemies. 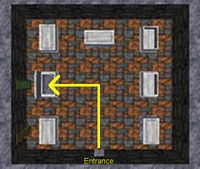 Upon entering, open the second tomb on the left and proceed down. 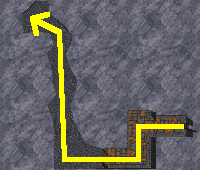 Go left and down into the cavern area. Follow the passageway and turn right at the first opportunity.

Take a left at the first opportunity and open the locked door to the King of Worms.

The King of Worms awaits

Do not be alarmed by the powerful enemies; they will not attack unless provoked. Approach the dais and give the King of Worms the letter. He will read it and say:

"Very good. If you are not rewarded with death by the loyal servants of the Barrow, give this note to Princess Morgiah please."

The King of Worms provides a short response letter to take back to Morgiah, which reads:

Leave the dungeon via Recall, Levitate, or climb (only the north wall of the initial drop-down passage is climbable). Alternatively, activate the nearby tapestry; it will provide a temporary levitation effect. Return to Castle Wayrest.

Deliver the response letter to Morgiah, and she responds:

"It's done! I'll be queen of Firsthold! Although I'm sure the engagement will be quite lengthy. Now, I promised you information about the Emperor's letter.

The letter you seek is in the hands of Gortwog, the Warlord of the Orcs. He bought it from the thieves guild [sic] of Daggerfall after one of their number stole it from Queen Aubk-i.

I confess I don't know why the Emperor sent it to Aubk-i. The girl is innocent to a fault, and everyone knows that Gothryd is not the loyal empire toady that Lysandus was. Of course my own family...well enough of this boring court gossip.

If you really want to find this letter, you should get in good with Mynisera, the former Queen of Daggerfall, and Queen Mother to Gothryd. I wouldn't directly approach her. Start with someone of lower station."

Morgiah gives you a random item as a reward.

If you successfully deliver both letters, you will gain reputation according to the table below.

Sometime after, you will receive a letter on Morgiah's engagement.