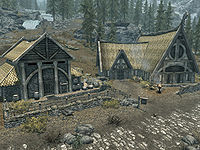 Honningbrew Meadery is a small meadery just southeast of Whiterun, owned by Sabjorn. 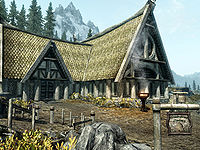 The sign and entrance to the Honningbrew Meadery main building 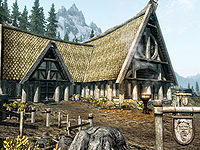 It is located at the crossroad by the bridges to the southeast of Whiterun. It produces Honningbrew Mead in direct competition with Black-Briar Mead. The site consists of two buildings: Honningbrew Meadery and Honningbrew Boilery, both of which share a basement.

There are two "Honningbrew Meadery" signs, one on either side of the path leading to the entrance to the meadery, which is always unlocked. There is a third sign to the right of the entrance to the boilery, which is kept locked and requires a key. Stacked around the entrance to the boilery are many barrels, some containing bottles of Honningbrew Mead, and others regular foodstuffs. There are numerous flowers and plants in the immediate vicinity, as well as monarch butterflies and blue butterflies during the day and luna moths and torchbugs in the evenings and at night. 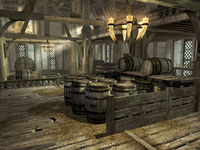 The meadery is the larger right-hand building. A counter is in front of the wall opposite the entrance. Prior to starting the related quest, Sabjorn and his employees, Eimar and Mallus Maccius, can be found here. Sabjorn is happy to buy and sell foodstuffs. On your immediate left upon entering is a bookcase holding eight common books, and on your right is an end table with a bowl of red apples on top. The counter has five bottles of Honningbrew Mead, a sweet roll, and a honey nut treat on top, and a further twenty-one bottles of mead underneath. Behind the bar are two sets of shelves holding nine more bottles of mead and another sweet roll, as well as some cheap crockery. Against the east wall is a long wooden table with several mead barrels on top, with a bowl containing four honey nut treats beside them. In both the northeastern and northwestern corners are small tables and chairs, holding a total of four bottles of Honningbrew Mead, an apple pie, two red apples, a honey nut treat, and a sliced eidar cheese. A third small table is against the east wall, with a single bottle of Honningbrew Mead and a sweet roll on top. In the southwestern corner is a stack of barrels containing more bottles of Honningbrew Mead. There are double doors in the middle of the west wall leading to the storage area.

After starting the related quest, when you enter you will find Sabjorn standing in front of the counter alone with two dead skeevers on the floor, one at either end of the room. After speaking with Sabjorn and convincing him to let you help, he will hand you a copy of the Honningbrew Meadery key, which opens both the door into the basement and also the door to his sleeping quarters in the loft.

The storage area is filled with many stacks of barrels containing bottles of Honningbrew Mead and sacks of foodstuffs. Towards the rear of the room is a set of shelves holding eighteen bottles, a narrow table with five more bottles on top, and a bucket underneath containing four more bottles. At the southern end of the room is a flight of stairs leading down to a door to Honningbrew Basement, which is locked and requires the key given by Sabjorn. There are three bear traps at the top of the stairs, and another at the bottom by the door.

At the northern end of the room are four more bottles of Honningbrew Mead on top of barrels. In the northeastern corner is a doorway to a flight of stairs leading up to the loft. Under the stairs is one more bottle of mead. The loft is only partially boarded along the west, south, and part of the east walls, with a railing overlooking the storage area below. Against the west wall is a single owned bed, with a wall shelf above it holding a copy of The Lusty Argonian Maid, v2, a red apple, and an eidar cheese wedge. Against the south wall is a small square table, with a bottle of Honningbrew Mead on top and an owned bed roll beside it. At the end of the boarding on the east wall is an adept-locked door, which is opened using the key given by Sabjorn.

You will need to visit Sabjorn's quarters to access the information needed for Maven Black-Briar for the quest. His bedroom contains a large owned double bed coming out from the north wall, with end tables on either side. On top of the end table on the left is a bottle of Honningbrew Mead, a red apple, and a goat cheese wedge, while on the end table on the right is a common book. Under the bed is a bowl containing a bottle of Black-Briar Mead. Against the east wall is an expert-locked door; to the left is Sabjorn's dresser, which is locked and requires a key. It has a set of clothes and a bowl containing boiled creme treats on top. To the right of the door is a tall wardrobe containing fine clothes. Against the south wall is a long wooden table, with a plate of grilled leeks and two salmon steaks, an iron dagger, a bottle of wine, a note entitled Have Need of Cynric from Maven, and an empty display case. To the right is a small cupboard. The west wall has a set of shelves against it holding ten common books, a bottle of alto wine, and a bottle of wine. To the left on the floor is a drum, and to the right is a small wooden table and two chairs. On the table is a bottle of alto wine, two honey nut treats, a common book, and a copy of the Alchemy skill book A Game at Dinner.

The expert-locked door leads to a small room with two wall shelves behind the door on the north wall. On these is a medium coin purse and some fine crockery, and next to them is a tall wardrobe containing fine clothes. Opposite, against the south wall is a long end table with three silver ingots, a medium coin purse, a silver necklace, an empty strongbox, and the Honningbrew Decanter, a unique item prized by Delvin Mallory as part of the quest The Litany of Larceny. To the right of the end table, on the floor, is a large coin purse. 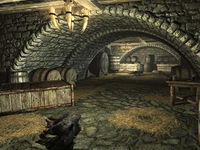 The basement only becomes accessible once you start the related quest and receive the Honningbrew Meadery key from Sabjorn. Upon entering, you will see several dead skeevers and a bear trap in front of you. Off to the left is a skeever that has been magically enhanced to be poisonous, similarly to frostbite spiders. The room contains several large vats and large stacks of unusable barrels. In the middle of the east wall is a set of shelves holding five bottles of Honningbrew Mead, and on the south wall, at the far end, are two barrels containing more bottles of Honningbrew Mead with a set of shelves that have been knocked over to reveal a tunnel behind. Two bear traps have been set in front of the hole.

Just inside the tunnel is another dead skeever, near where the tunnel descends to the south. At the bottom, the tunnel turns to the east, then opens into a cave containing four more skeevers, some of which are venomous. The cave has quite a lot of vegetation that can obscure your view. On the ground are three bottles of Honningbrew Mead, and against the east wall a barrel containing more bottles of mead. To the north is a narrow tunnel leading onwards. Follow the tunnel as it continues to descend past a web sac containing a skeever tail near a glowing mushroom on the wall and takes three turns. Just after the final turn to the east, the tunnel opens into another cave, with several frostbite spiders, more web sacs, and many glowing mushrooms on the walls. Again to the north is a narrow tunnel, which after two turns opens into a cave containing only several unusable barrels, an unusable crate, and two bear traps. At the far end, a tunnel with a tripwire across the entrance that triggers a swinging mace trap descends to the east. Keep following the tunnel as it takes two turns before opening into another cave. You will be immediately spotted by a skeever, unless your Sneak skill is exceptional. Also in the cave are several other skeevers, some venomous, and a mad alchemist named Hamelyn.

Once they are all defeated, loot Hamelyn to find his journal, which explains how he was exiled from the College of Winterhold and jailed in Whiterun for being a danger and insane; he escaped the jail, and plotted his revenge against both the people of Whiterun and Winterhold. To the southeast you will find the skeever nest to the right of an alchemy lab. Between the nest and the lab is a novice-locked chest, two leveled potions, and a copy of the Sneak skill book Three Thieves. To the north is another narrow tunnel that takes two turns as it rises and eventually leads to the basement under the boilery. At the exit from the tunnel are two more bear traps and another set of shelves that has been moved to reveal the tunnel. The basement contains many large vats and barrels, but only one, on your left as you enter the basement, contains bottles of Honningbrew Mead. At the far end, on the north wall, is a door leading up into the boilery itself. 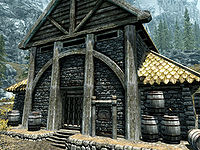 Once you have added the poison to the boiler, the quest will instruct you to return to Sabjorn. When you reenter the meadery, you will find the commander of the guard in Whiterun, Commander Caius, with Sabjorn standing behind the counter, and Mallus Maccius standing at the other end of the room. The skeevers and blood have been cleaned up, and Sabjorn has been delaying the commander awaiting the all-clear from you. Sabjorn will tell you that you'll have to wait until the end of the tasting for your pay. Once Sabjorn has been taken to Dragonsreach by the commander, you will be free to speak to Mallus, who, after a short monologue, will hand you the key to Sabjorn's dresser. The dresser contains a promissory note and a few septims. Once you have returned to Maven, Mallus will be available as a fence.