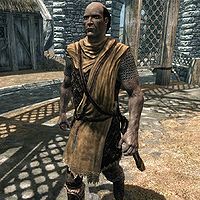 Commander Caius is an Imperial soldier stationed in Whiterun. He is in charge of the guards patrolling the hold under Jarl Balgruuf the Greater.

Caius wears a set of Whiterun guard's armor and a pair of fur boots. He is equipped with a leveled sword which can be up to Daedric quality, and carries a selection of common loot and gold.

If the Stormcloaks capture Whiterun, his position is taken by Sinmir. Caius will then move to the Blue Palace together with Balgruuf, Proventus Avenicci and Irileth.

As long as Whiterun is under control of the Imperial Legion, he may greet you in a number of ways. He may simply introduce himself: "I'm the commander of the guard here in Whiterun." He may reassure you: "My boys'll keep you safe. Don't you worry." He may give you a warning: "You're not thinking of causing trouble here in this beautiful city, now are you? 'Cause I'd strongly advise against such foolishness." He may simply ask: "Yes? What is it?"

This Skyrim-related article is a stub. You can help by expanding it.
Retrieved from "https://en.uesp.net/w/index.php?title=Skyrim:Commander_Caius&oldid=1769670"