During the course of the Thieves Guild questline, you may run into one of several unique items in locations relevant to the quests. Picking them up will add a miscellaneous task to take it to Delvin Mallory, who will pay a leveled amount of money for the item. 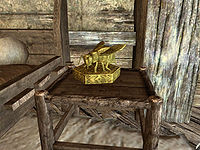 The first trinket that you will likely encounter is the Queen Bee Statue. It is found on a bedside table in Aringoth's room in Goldenglow Estate. This location is visited in the Thieves Guild quest Loud and Clear. When picked up, a prompt will tell you to return the item to Delvin Mallory.

The Honningbrew Decanter is located in a room in the upper floor of the Honningbrew Meadery, behind the door which has an expert lock. You will most likely come across it during the quest Dampened Spirits.

The East Empire Shipping Map can be found on a table next to some loot in the Dockmaster's office in the East Empire Company Warehouse. It is easiest to acquire this during the quest Scoundrel's Folly; if you attempt to steal it at any other point, the warehouse may be patrolled by guards, who will attack you on sight if spotted.

The Model Ship is found on a booby-trapped pedestal in Snow Veil Catacombs. The pedestal is surrounded by oil, and removal of the ship causes the oil to burst into flame. It is fairly easy to grab the ship near the doorway and retreat to avoid the fire. It is also possible to shoot one of the exploding urns that fall to set off the trap; however, this causes the ship to fly away from the resulting explosion—into a wall, behind a cabinet or even into the room below—making it easy to lose. Another option is to shoot the ship away from the oil on the ground. Be aware that picking up the ship will still trigger the urns. Another option, if you know the Telekinesis spell, is to stand away from the oil and use the spell to retrieve the ship. Another option is to place an item on the pedestal, preventing the trap from activating when you take the ship. The last option would be to use the "Slow Time" shout. Go right up to the pedestal, shout, immediately grab the ship and run away from the oil. Even if you only have the first word of the shout, you will have plenty of time to watch the urns fall to the ground. Of course, you can always set the oil on fire yourself and let it burn up, then take the ship, but the urns will still injure you a bit if you stand too close. Use any flame spell (besides cloak) or the "Fire Breath" shout. You can also use whirlwind sprint, grab the ship, and immediately sprint away from the oil. You visit Snow Veil Catacombs during the quest Speaking with Silence.

The Dwemer Puzzle Cube is in Calcelmo's Laboratory, which is accessed via the Dwemer Museum in Understone Keep. It is found in the large room with the Arcane Enchanter, just before moving on to the balcony. You travel through the laboratory during the quest Hard Answers.

The Bust of the Gray FoxEdit

The Bust of the Gray Fox is found on a table in Riftweald Manor during the quest The Pursuit. It is easy to miss as it blends perfectly with the stone behind it, but it's sitting right next to the quest objective.

The Left Eye of the FalmerEdit

Notes
* Any text displayed in angle brackets (e.g., <Alias=LocationHold>) is dynamically set by the Radiant Quest system, and will be filled in with the appropriate word(s) when seen in game.
Retrieved from "https://en.uesp.net/w/index.php?title=Skyrim:The_Litany_of_Larceny&oldid=2586560"