An outfit both pretty and practical for working the common room of the local tavern. 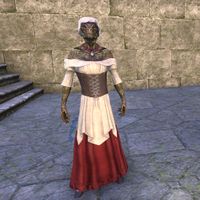 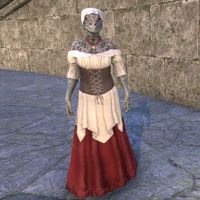 from May 9 through May 13, 2019. It is now available as an Epic-level reward in Gloomspore Crates.

(The jewel on the necklace is not dyeable)

"Lesser mages are often surprised to find that the usual apparel of a Telvanni Master Wizard is more stately than ostentatious. The truth is, Wizard Lords such as Divayth Fyr have no need of gaudy display. Their power lies elsewhere. 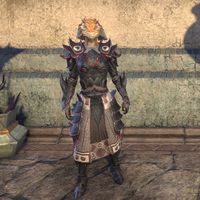 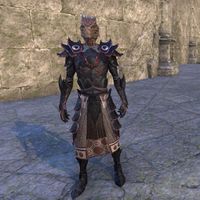 The Wizard-Lords of Great House Telvanni measure themselves by magical power rather than by ostentation or display, so the design of their robes is relatively simple and restrained. Don't be fooled: these are the garments of powerful sorcerers. 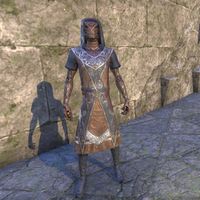 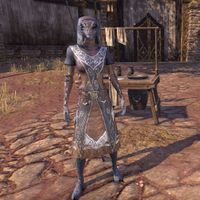 during the 2018 Black Fredas sale.

(The filigree and belt buckle are not dyeable)

The Thieves Guild of Abah's Landing distributes a set of protective garb to its members. The many buckles are carefully secured to prevent jangling, and scuffed to avoid reflection in the desert sun. 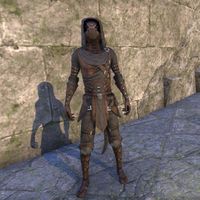 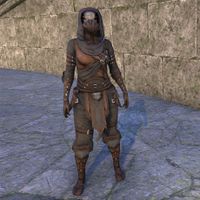 (Silver buckles are not dyeable) 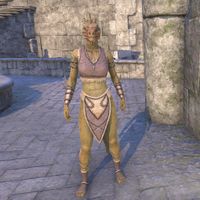 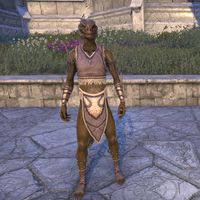 Known for striking quickly and quietly from stealth, Timbercrow wanderers serve as scouts and assassins for their clan. They prefer to keep their garb simple and light to remain unfettered by the chains of civilization.
Acquired by combining 50 Siege of Cyrodiil Merits, available by completing District Quests in the Imperial City, with a Siege of Cyrodiil Distinction, available for purchase from Tel Var General Merchants in the Imperial City.

Timbercrow Wanderer is a costume which can be obtained by combining 50 Siege of Cyrodiil Merits with a Siege of Cyrodiil Distinction. You can earn one Merit per character per day by completing an Imperial City District Quest (not affected by double event drops). You can then purchase the Distinction for Tel Var Stones from a Tel Var General Merchant. This will earn you a Runebox: Timbercrow Wanderer Costume, which can be consumed to unlock the costume or sold to another player. This costume was added in time for the 2020 Imperial City Celebration Event.[verification needed — what patch?]

When you specialize in venoms and poison-making, you invest in special protective garb to keep from being poisoned by your own experiments—or else! And if your clients are just a little intimidated by your creepy attire, all the better. 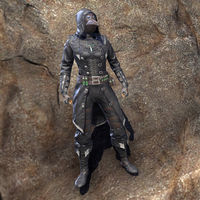 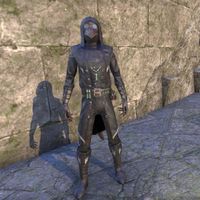 (The vials full of chemicals and the seams cannot be dyed)

Merchants need to look presentable, and those who travel require protection from the elements. With this outfit, you can travel through Tamriel and beyond knowing that you have met both requirements! 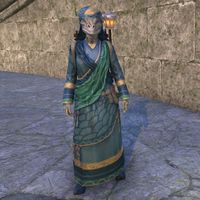 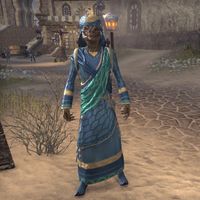 The serious treasure hunter knows it's really all about the gear. Whether you're exploring subterranean catacombs, ancient ruins, or a shattered shipwreck, when you run into an obstacle, you want to have the right tool at hand. 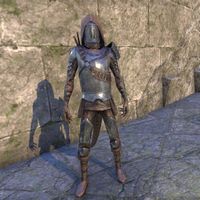 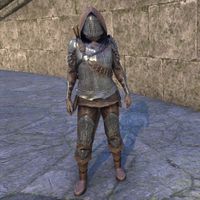 . It is also available as an Epic-level reward in Hollowjack Crown Crates.

(The scrolls and spelunking gear are not dyeable)

This patterned robe of leathers and feathers resembles those worn by those Argonians who commune with the Hist. 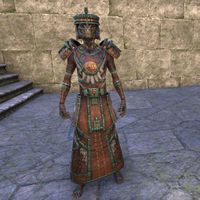 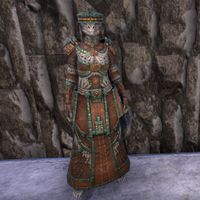 An Argonian costume worn by Treeminders. Part of the Tribal Shamans Pack, which was sold in the Crown Store for 00700700

"Some occasions call for formal wear," says Stitchmaster Moneriel of Elden Root. "You may have to attend an important event, but you can still turn heads from trunk to treetop in my thousand-beaded ceremonial dress!"

. It is also available in Wild Hunt Crown Crates as an Epic-level reward. 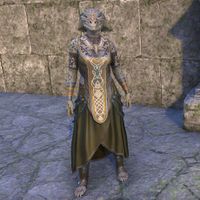 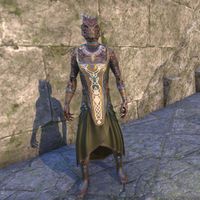 Dyeing
Slot 1: Brownish green parts (skirt and chest)
Slot 2: Brown linings on the dress, armbands, and most of the shoes
Slot 3: Greenish blue linings on the middle, shoes, skirt straps and jewelry

(The bird skull, midline tapestry and the beaded necklace cannot be dyed)

"The thousands of small shiny particles that decorate the Treethane's Mosaic Jerkin may appear at first glance to be of turquoise or other precious stones, but they are actually the iridescent carapaces of deep forest beetles."

from March 21 through (?), 2019. It is now available as a Legendary-level reward in Ayleid crates. 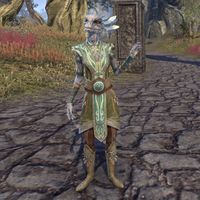 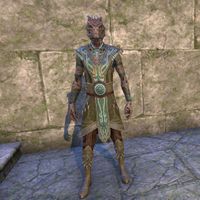 A mix of metal and leather melded with the hide of a great brown bear, fashioned to honor Trinimac, the warrior god. 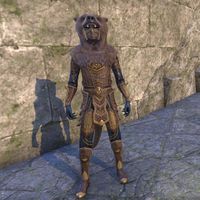 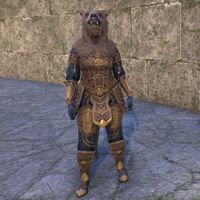 The Trinimac's Penitent Knight costume is acquired by completing the quest A Cold Wind from the Mountain.

This costume represents the armor worn by the assassins who accompanied the Tsaesci Akaviri invasion.