"Durable, flexible, mudproof, and stylish," says the latest missive from designer Jaxa the Hermit delivered by his mute daughter. "What more could a Saxhleel want from a Crocskin Overkilt? Glowing torchbug buttons? Actually, that's not a bad idea...." 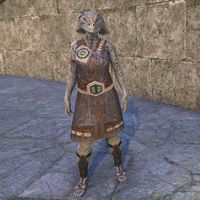 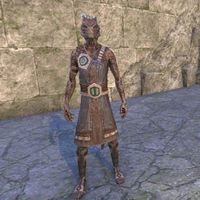 . It was first available exclusively to ESO Plus members for 00560560

Dyeing
Slot 1: Brown leather going down the center and making up the undercoat
Slot 2: Lighter brown on the overcoat
Slot 3: Tan accents on coat and sandals

(The colorful beading, center of the belt, most of the sandals and the tan squares running from the right shoulder down the bottom hem of the overcoat cannot be dyed)

Jork the Tailor-Thane says, "Summer may be short in Riften, but when it finally comes the Nords greet it with open arms. And how better than in this patterned sleeveless jerkin, accented with rawhide laces?" 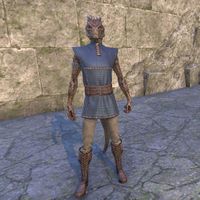 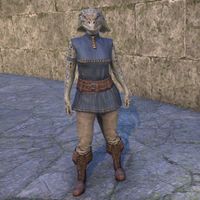 (Armband and belt buckles are not dyeable)

No one has more respect for their Ceremoniarchy and its functionaries than the High Elves: dignity and a high self-regard are the watchwords of an Altmeri Reeve. This outfit represents the Summerset administrator in all his glory! 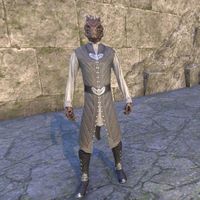 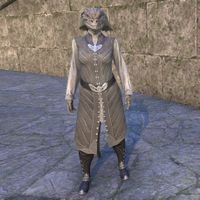 (Pants, silver trim and buttons on coat and boots, belt buckle are not dyeable)

With a nod to tradition but clearly fashioned with the new sensibilities of a reinvigorated Orsinium in mind, the crown and armor of the Orsimer King makes a definite statement about strength, unity, and honor. 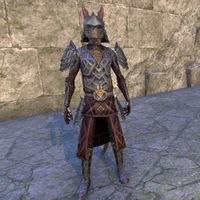 Regalia of the Orsimer King (male) 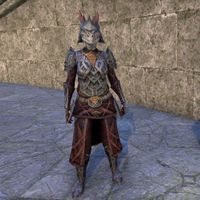 Regalia of the Orsimer King (female)

The Regalia of the Orsimer King is acquired by completing the main story in Orsinium.

(Helm spikes are not dyeable)

Regalia of the Scarlet JudgeEdit

This regalia has been passed down through generations of vigilante heroes, each cloaked in mystery and intrigue. With it comes the heavy burden of upholding justice in Vvardenfell, no matter the cost. 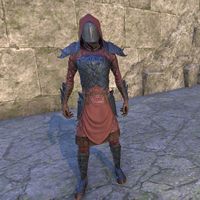 Regalia of the Scarlet Judge (male) 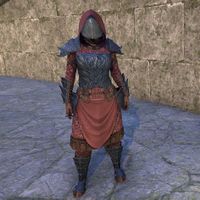 Regalia of the Scarlet Judge (female)

Sure, Dragon Priests were evil overlords who ruled mortals in the name of tyrannical Dovah, but what a fashion sense they had! Now you can adopt the appearance of the Renegade Dragon Priest from Scalecaller.

The Renegade Dragon Priest costume was available in the Crown Store for 025002,500

from August 23 to August 27, 2018. It is now available as a Legendary-level reward in Sovngarde Crates. 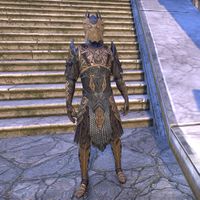 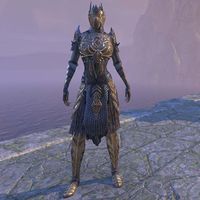 This jovial jester garb, including mask and bell-cap, could even make a zombie smile. 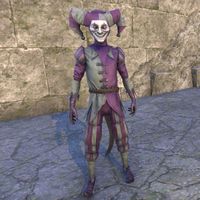 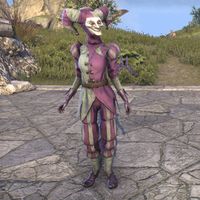 A jester costume with a grinning white mask. Sold in the Crown Store for 700

(Mask, belt, shirt straps, and bells on hat and shoes are not dyeable)

Though inspired by the raffish attire of roustabouts on the Imperial Waterfront, this casual outfit is made of the finest materials, and according to designer Diocletia, it's a superior choice for daytime wear in any of the Imperial City's six districts. 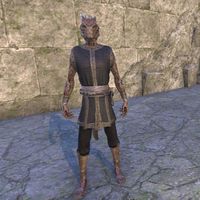 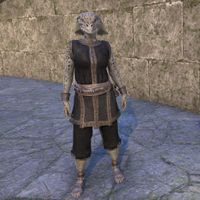