This classic Nord kilted jerkin outfit projects the confidence and authority of a Falkreath fighting clan chief - complete with the traditional horned helmet! 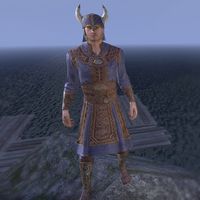 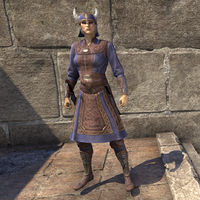 from (?) to November 6, 2017. It is also available as a Legendary-level reward in Psijic Vault Crates.

This costume replicates the look of Fighters Guild combat armor.

This costume replicates the look of the Fighters Guild cool-weather uniform.

This costume replicates the look of the Fighters Guild warm-weather uniform.

Wear the Outfit of the Firedrakes, those deadly draconic firebrands of the no-holds-barred Battlegrounds!

You might think the profession of Fisher is one that's simple, slow, or easy. You'd change your mind fast the first time you hauled in a net full of slaughterfish! 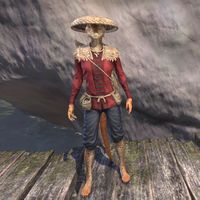 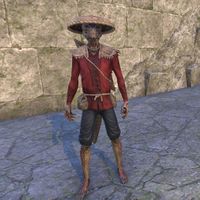 The Fisherfolk Work Wear costume was available as a Week 3 Daily Reward during July of 2019. It was later made available as a Legendary-level reward in Ayleid crates.

Dyeing
Slot 1: Red shirt
Slot 2: Pants and clasps holding the front of the shirt closed
Slot 3: Pouches on the waist

(The contents of the pouches, the reed-woven shawl, hat, belt, fish and baskets are not dyeable.)

Look sharp while you hammer out that dagger! says Orc-tailor Borzighu. "Our Forge-Wife's Frock, spun from non-flammable gray scathecraw fibers, protects you from cinders, soot, hot embers, and even spatters of molten metal. Hot!" 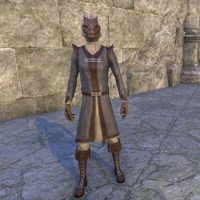 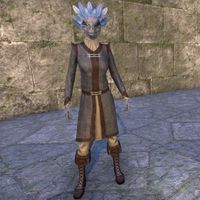 (The bootlaces, clasps and the soles of the boots are not dyeable.)