Lady Eloisse of House Manteau offers this traditional Breton evening dress. As she puts it, "Ostentation is vulgar, but true elegance never goes out of style!" 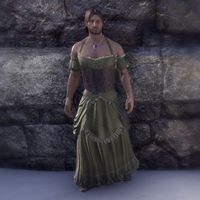 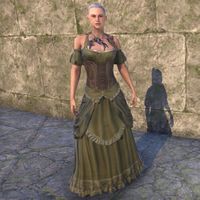 Dyeing
Slot 1: Bodice and most of skirt, sleeves, shoes
Slot 2: Corset, soles of shoes
Slot 3: Side and back pleats of dress, inner pleats on sleeves and bodice, shoestraps

(Necklace is not dyeable)

A mix of metal and leather melded with the hide of a great black bear, fashioned in the ancient style of the Orsimer. 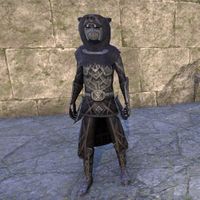 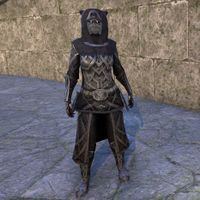 The Old Orsinium Sentry costume is Acquired by completing the quest A Cold Wind from the Mountain.

As the Wise Woman of your clan, or the Hunt-Wife on ceremonial days, you must project both grace and authority, says designer Borzighu the Tidy. "Count on my gilt-broidered vestment to provide that, and more!" 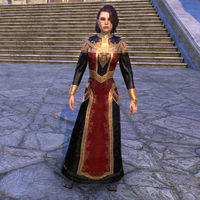 . This costume is now available as an Epic-level reward in New Moon Crown Crates.

This costume replicates the armor worn by Orcish mountain scouts in Skyrim and northern High Rock. 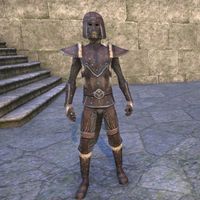 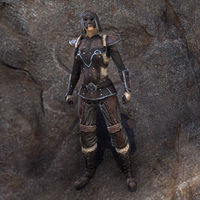 Dyeing
Slot 1: Most of helmet, chest plate and shoulders, boots, and gloves, stripes on front and back of legs, knee-belts
Slot 2: Trim and details on helmet, chest, shoulders, gloves, and boots, buckles on knee belts
Slot 3: Undershirt visible at neck and upper arms, sides of legs

(Fur lining at shoulders, underarm and waist, wrists, and top of boots are not dyeable)

When rounding up criminal scum or raiding hives of heresy in the dark of night, the Temple's Ordinators don this night-dark armor. 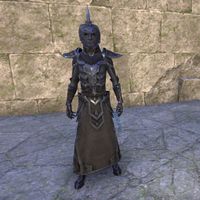 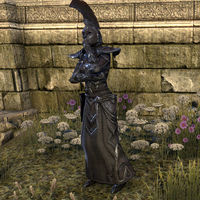 Part of Ordinator Armor Pack which was sold in the Crown Store for 010001,000

. It is also available as a Superior-level reward in Dwarven Crown Crates.

(The inner arm portion that extends from the elbow up to the shoulder cannot be dyed.)