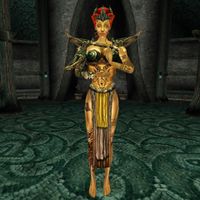 Almalexia is one of the three Tribunal immortals, who resides in Mournhold, rarely leaving her High Temple. Almalexia appears as "alm" in Almsivi. She seems to be taking her decline of power (due to being deprived of the Heart of Lorkhan) rather poorly, and according to Galsa Andrano, Almalexia has become more cold and distant. Galsa worries for the goddess, as the Tribunal hasn't walked among the people for the last 50 years. Almalexia's homilies contain lessons of compassion and wisdom, but her sermons as of late are more focused on destroying the wicked, punishing the foolish, and rewarding the unquestioning faithful.

Almalexia is suspicious of King Hlaalu Helseth, but he isn't currently her priority.

Once you have gained access to the High Chapel where Almalexia resides, you may also dicuss a number of non-quest-related topics with her:

Once you have retrieved Barilzar's Mazed Band, Gavas Drin will direct you to personally deliver it to Almalexia. Since it is impossible to enter her sanctum without an invitation, this is also the first time that you get a chance to speak with her:

If you mention the ring again after the completion of this quest, Almalexia reacts as follows:

Note, however, that this can only be done by either not exiting the conversation in the first place or waiting until a later point in the questline, as immediately after the completion of this quest, Almalexia does not wish to speak with you again:

If you speak with Almalexia while the attack is taking place, she will bid you to investigate it:

Speaking with her again after you put an end to the attack but before Fedris Hler asks you to investigate the ruins of Bamz-Amschend elicits the following response:

Upon the completion of your investigation of Bamz-Amschend, Fedris Hler asks you to speak with Almalexia again. Do so to receive your next task from her:

If you return to Almalexia after speaking with Meralyn Othan but before learning from Eno Romari that the cult is a suicide cult, she says:

Return to her after learning the truth about the cult to wrap up your investigation and move on to the next phase of the quest:

If you wish, you can ask her some more things before you carry out this new task that Almalexia has given to you:

And if you speak with her after you have activated the Karstangz-Bcharn but before you have actually used it to create an ashstorm in Mournhold, she says:

Return to Almalexia once you have created an ashstorm in Mournhold to finish the quest:

At this point, she also has some new things to say about previously discussed topics:

As soon as the previous quest is over, you may receive your next quest from Almalexia by speaking with her again:

If you speak with Almalexia again while Salas Valor is still alive, she says:

Return to Almalexia after the deed is done to finish this quest:

From here, the conversation continues precisely as above, with "Protection against paralysis, please!" substituted for "Tamed lightning, please!". (Note that, due to a bug, you never get an actual lightning shield, but instead end up with an increased resistance against paralysis if you kill Salas Valor early and subsequently pick that option.) If you mention the missing Hand again after the completion of the quest, Almalexia says:

The next time that you speak with Almalexia, she has yet another task ready for you:

If you speak with her again before you finish reforging the blade, she says:

Return to Almalexia with a reforged and rekindled Trueflame to wrap up this quest and hear about the next 'obstacle' that you will have to overcome:

After the end of this quest, Almalexia may also say:

As has become clear at the end of the previous quest, Almalexia wishes for you to stop Sotha Sil, who she claims has become unstable. Speak with her to learn more about this threat that he allegedly poses and what she wants you to do about this:

Should you decide that you do not want Almalexia to transport you to the Clockwork City right away, you can ask her some more questions before you embark on this final quest:

When you are ready, speak with Almalexia again to have her teleport you to the Clockwork City:

After Almalexia teleports you to the Clockwork City and you fight your way to Dome of Sotha Sil, you will be confronted with a few nasty surprises. Sotha Sil is already dead by the time that you reach him, and the culprit is none other than Almalexia herself, who appears before you when you try to leave the Dome. Evidently, she has gone quite mad as a result of the loss of her own divinity and has been manipulating you all along:

Almalexia: "Nerevarine. Here it ends. This Clockwork City was to be your death. You were to be my greatest martyr! The heroic Nerevarine, sacrificing all to protect Morrowind from the mad Sotha Sil. But you live! You live! Fear not. I will tell the tale myself when this is done. I will tell my people how with your dying breath you proclaimed your devotion to me, the one true god. Your death will end this prophecy and unite my people again under one god, one faith, one rule by my divine law. The puppet king will lay down his arms and bow to my will. Those who do not yield will be destroyed. The Mazed Band has allowed me to travel to this place. Here, I slew Sotha Sil. Here, I summoned the Fabricants to attack Mournhold. I will be the savior of my people! I alone will be their salvation!

The last segment of her monologue differs based on whether or not Vivec is still alive. If Vivec still lives, Almalexia says:

Almalexia: "None may stand in my way. Not you, and certainly not Vivec. He is a poet, a fool. I will deal with him when I have finished with you. And Sotha Sil...he always thought himself our better, shunning us, locking himself in this hole. He spoke not a word as he died. Not a whisper. Even in death, he mocked me with his silence! But I think you will scream, mortal. For now, you face the one true god."

If you killed Vivec at some point before this confrontation in the Clockwork City takes place, Almalexia says:

Almalexia: "But I smell the blood of gods on your hands, Nerevarine. Vivec was a fool. I'm sorry I wasn't there to see his death. But Sotha Sil...he always thought himself our better, shunning us, locking himself in this hole. He spoke not a word as he died. Not a whisper. Even in death, he mocked me with his silence! But I think you will scream, mortal. For now, you face the one true god."

Either way, Almalexia will turn hostile as soon as her monologue is over, and the only way to finish this questline and leave the Clockwork City, is by facing Almalexia in battle and killing her in the Dome of Sotha Sil.