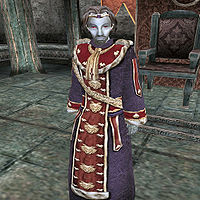 King Hlaalu Helseth, a Dark Elf, can be found in the Royal Palace. He has recently become the king of Morrowind, after the death of King Llethan. Although King Llethan was old, there are rumors that Helseth killed him with poison, but there doesn't appear to be much evidence of these reports. These rumors are well documented in the Common Tongue, a paper printed by Trels Varis that can be found in a variety of locations throughout Mournhold. After a little investigating, it becomes apparent that King Helseth was behind the Dark Brotherhood attempts at assassinating you. While the King says it was a simple mistake, his history of assassinations and events during an assassination attempt on Barenziah, Helseth's mother, seem to indicate that he wants you dead. Of course, even though Helseth is obviously suspicious of you, he is facing a greater problem in controlling Almalexia and the Tribunal Temple's influence.

While Helseth is a competent fighter, it is his equipment that makes him a truly challenging opponent. He is carrying the Royal Signet Ring, a valuable and extremely powerful ring, a Daedric Dai-katana and a unique Frostguard Robe, under which he wears a Royal Guard Cuirass, Greaves and Boots.