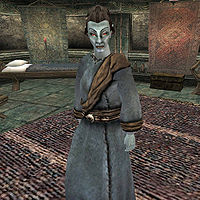 Galsa Andrano, a Dark Elf healer, is an Adept in the Tribunal Temple in Mournhold, where she sells ingredients, potions, and spells to all who need them. She is becoming increasingly concerned about Lady Almalexia's behavior. Galsa might be willing to spy on the Goddess, if someone needs a temple informant, from her position in the Temple's Infirmary. Galsa is a restocking vendor of the following ingredients: Horn Lily Bulb, Nirthfly Stalks, Sweetpulp, and Scrib Jerky.

She wears a common shirt, a common robe, and common shoes. She carries up to 25 gold, two random potions, and her supply of ingredients for sale. Aside from her natural resistance to fire and the sanctuary provided by her ancestors, she knows various Mysticism and Restoration spells. Specifically, these are the same spells she has for sale.

"Walk in the light, in the spirits' names."

If her disposition is below 60:

"These are difficult times. Everyone says so. But we are told, "Count only the happy hours." I am a faithful follower of the Tribunal, and I believe in the Seven Graces and the Seven Virtues. Yet.... No. You must excuse me. You are a stranger, and one does not share ones doubts with strangers."

If her disposition is above 60:

"I am a faithful believer.... but Almalexia makes me uneasy. For the last 50 years, the Tribunal stopped walking among us, stopped listening and speaking with us. This worried me, and made me sad. Were our gods abandoning us? Were they growing weak? But since Almalexia has lately come among us again, I feel more worry, not less. Her face glows brightly with hope and power, but her words seem dark and bitter."

Ask about the Temple and King Helseth:
If her disposition is below 90:

"What? Why do you ask me this? This is a mistake. You are a stranger, and one does not share ones doubts with strangers. I don't want to talk about this with you."

If her disposition is above 90:

"Helseth has murdered King Llethan and stolen his crown. It does not matter that King Llethan was a fool. He was OUR fool. So long as the puppet king was a joke, we all could laugh and ignore him. Helseth is not a fool, and no one is laughing. If Helseth seeks in earnest to be king, then Almalexia and the Temple are sworn in earnest to destroy him."

"Almalexia's homilies are full of compassion, understanding, wisdom and acceptance. But now her sermons seem more intent on destroying the wicked, punishing the foolish, and rewarding the faithful -- the unquestioning, obedient faithful. Yes, these are difficult times. And in difficult times, to survive, we must be hard. I tremble for the failing of my faith... but the god I once loved now frightens me."

Ask if you can come speak again another time. "Yes, you may come again another time. It is hard to talk of such things. I feel guilty, and disloyal, but in my heart, I know something is not right. It helps a little to be able to speak of it with you."

Mention Mehra Milo and the Dissident Priests. "You are a friend of Mehra Milo? Then I can speak freely. Helseth has murdered King Llethan and stolen his crown. It does not matter that King Llethan was a fool. He was OUR fool. So long as the puppet king was a joke, we all could laugh and ignore him. Helseth is not a fool, and no one is laughing. If Helseth seeks in earnest to be king, then Almalexia and the Temple are sworn in earnest to destroy him."

"I've heard some of the high priests of the Temple are going to be relocated. I haven't heard who or where, or why, but it seems to be a result of some serious disagreement about Temple doctrine between the Alma Rula and some outspoken critics."
"I've heard that a group of Temple priests plan to reform the Temple, to restore the ancient worship of the ancestors -- and the good Daedra in particular. I think the idea is to worship Almalexia, Sotha Sil, and Vivec more like saints than like gods -- the way Saint Nerevar is worshipped. They say the war with Dagoth Ur has exhausted the Tribunal, and they wish to retire. Since they haven't appeared publicly in so long, the Temple wouldn't be so different, really."

"The Dissident priests dispute Temple doctrine. They challenge the purity and divinity of the Tribunal, suggesting their powers are sorcerous, not divine. They also condemn the arbitrary power of the Ordinators, and accuse the Temple hierarchy of self-interest and corruption. The Dissident Priests are outlawed and persecuted by the Temple."

Galsa has the following spells available for sale: