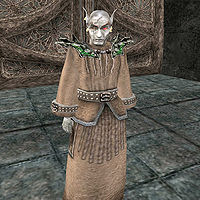 Hler is described as a competent man, someone that's respected even by adversaries. He is said to have a darker past as an assassin.

He is wearing a common robe and shirt with pants, and glass pauldrons with matching boots. Aside from his natural resistance to fire and the sanctuary provided by his ancestors, he knows no spells.

"Almalexia be praised, sera."
"Hmm...you again. You wish to be of further service to our Lady?"
"Our city is under attack! The Ordinators have been mobilized."
"The ashstorms are a nuisance, but it is as our Lady wishes."
"The Lady is gone...perhaps I can be of service to you?"

His greeting gives you the opportunity to accept this quest:

"Ahh...you're the one who has recently arrived in Mournhold from Vvardenfell. I was told of your arrival. I understand you had some problems with the Dark Brotherhood. An interesting group...and usually rather effective. I'm surprised you're still alive. Perhaps you have potential, or they sent incompetents. I believe you might be of service to our Lady."

If you speak to him at any point during the quest before being paid for finishing the job, he'll greet you as follows:

"Well, what's the status with the goblin army? Have you taken care of it yet?"

The Shrine of the DeadEdit

He greets you with the following:

"It's you again. I suppose you wish to be of further service to our Lady?"

If you speak to him before completing the quest, he greets you as follows:

"Yes? Aren't you supposed to be dealing with the Shrine of the Dead?"

After The Shrine of the Dead, but before starting Barilzar's Mazed Band, he greets you as follows:

"Yes...what is it you want? I heard you'd taken care of that shrine business. Go speak with Drin. He seems to like you."

He greets you as follows, allowing you to ask him about the Mazed Band:

"Drin sent you to me? Priests...hmph. As it happens, there is another way you may be of service to our Lady Almalexia."

If you speak to him after receiving the quest, he'll greet you as follows:

"Have you retrieved Barilzar's Mazed Band?"

When you approach after dealing with the fabricants, he'll greet you as follows, opening up the conversation to ask about the disturbance in Mournhold.

"I've heard about the attacks on the city. Good that you reported them to me, though. I've sent some High Ordinators to deal with the situation. You can help me in another way. I want you to investigate the disturbance."

After talking to Delitian about the attacks, he greets you as follows:

"I understand you've spoken to Delitian about the attacks on the city. He is correct in having you investigate the disturbance, but you should bring any information you find to me. This is a Temple city, and this is a Temple matter. We will deal with it."

If you greet him while no new advancements have been made in the investigation, he'll greet you with:

"Have you been able to investigate the disturbance further?"