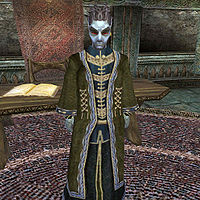 Gavas Drin, a Dunmer priest, is the Patriarch in the Tribunal Temple in Mournhold. He can be found in the Office of the Lord Archcanon. He scorns Helseth and his royal guard, even more so than you would expect from a Temple patriarch as is evident from his dialogue. He asks you to help Urvel Dulni clean the shrine of the dead.

Gavas Drin wears an expensive shirt, a pair of expensive shoes, and an extravagant robe. He also wields an ebony mace and carries ten exclusive restore fatigue potions with him. Aside from his natural resistance to fire and the sanctuary provided by his ancestors, he knows the spells Blood Despair, Second Barrier, Strong Reflect, and the unique spell Vivec's Wrath. He also possesses the unique ability Almalexia's Shield which grants him the following bonuses: 30% Reflect, 30% Resist Normal Weapons, 30% Resist Paralysis, and 30% Resist Poison.

While Gavas Drin does not believe you about the death of the Tribunal either, he does have a unique response to the news too: "[Anxious, but prepared and controlled.] I'm not sure you understand. The Tribunal are Living Gods -- but that doesn't mean you can come see them any time you want. In happier times, the Tribunal appeared before the people, just like us priests. But times have changed, and no one sees the Tribunal any more. So... of course... you could not have found Almalexia and Sotha Sil 'dead'. That's simply... impossible."