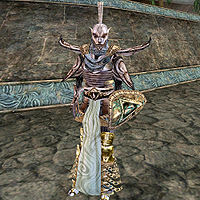 High Ordinators are the temple guards of Mournhold. They are sworn to uphold both Temple law and Imperial law. High Ordinators wear iridescent heavy armor made especially for them and called simply Her Hand's Armor. This heavy armor is one of the best and most valuable heavy armors in the game. Like their Ordinator colleagues in Vivec, their masks hide their faces. They all wield an Ebony Scimitar. The ones guarding Plaza Brindisi Dorom carry enchanted versions of the Scimitar that The Hands also own.

Like regular Ordinators, they will get angry at you and blacklist you if caught wearing their armor, attacking you on sight from that point on (though this may not always be the case, some may turn hostile and some may not). This can be quite dangerous as, unlike regular Ordinators on Vvardenfell, the High Ordinators have very high levels. The ones in Plaza Brindisi Dorom are especially dangerous as their Enchanted Scimitars can damage your strength and over-encumber you, making it very difficult to fight back.

The most skilled and trustworthy guard Almalexia herself, and are known as the Hands of Almalexia. The hands notice when you wear their armor, but they do not attack at the discretion of their lady.