You say these new creatures were fighting with the Dwemer creatures? This is very disturbing. Only someone with great power could control these fabricant creatures. Almalexia will be interested to hear this news. I'm sure she'll have some insight into it. — Fedris Hler

Fabricants only appear during and after the An Attack on Mournhold quest. They are mechanical creatures engineered by Sotha Sil, and shouldn't be confused with the Dwemer-made Centurions.

Description: A horrid creature resembling an undersized dragon with six legs and a tail stinger; it seems to be more strong than fast and attacks with claws, fangs, and tail.
Found: Plaza Brindisi Dorom, Bamz-Amschend, The Clockwork City.
Drops: Hulking Fabricant Elixir.
Resistant against: Shock and Paralysis.

* For some reason, Hulking Fabricants all have both a Resist Shock 75% effect, as well as a Weakness to Shock 25%. Theoretically, this should be equivalent to a Resist Shock 50%, but it has yet to be determined if there is really any difference. 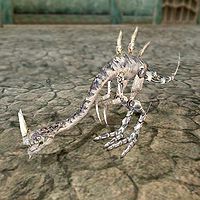 One Fabricant, made to order

Description: An artificial creature with synthetic legs and tail; it acts fast and agile and attacks with the large fang on its head.
Found: Plaza Brindisi Dorom, Bamz-Amschend, The Clockwork City.
Drops: Verminous Fabricant Elixir.
Resistant against: Poison, Paralysis and Magicka.