After your last quest for Archcanon Gavas Drin, you are directed back to Fedris Hler in the Temple Reception area. Mention service to our Lady Almalexia and Hler will say that the Lady wishes you to retrieve a powerful artifact, Barilzar's Mazed Band, although why she would need more power he can't possibly imagine. The band is somewhere in the Abandoned Crypt found in the sewers beneath the temple. The path was previously blocked by rocks (as you may have already discovered), but the Lady has been generous enough to remove them for you. Hler mentions that Gavas Drin can give you more details on the item, if you need it. You can question Gavas (first), Plitinius Mero, Barenziah and Torasa Aram about Barilzar's Mazed Band to get more information and journal entries. Gavas will answer only if you ask him before the others, but he doesn't know too much more, just that the band was created by the powerful mage Barilzar, sometime in the second era, soon afterwards disappearing. If you talk to Plitinius Mero, he will add that this ring was created as a teleportation/summoning device and was so evil that it was stripped of its power, so that only a god (or goddess) can use it now.

Return to the Temple Sewers via the Halls of Ministry and Temple Basement. The crypt can be found in the northwest corner of this area and, indeed, the rocks blocking the entrance are now gone. The crypt has the usual selection of undead (liches) and numerous rats, but nothing that difficult that you haven't encountered so far. 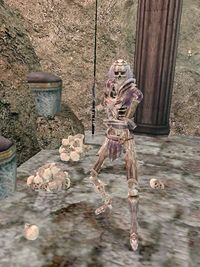 You will find the unique lich Barilzar in a cave in the north end of the crypt. When you approach, you will receive a short dialogue from him before combat is started. He will cast a variety of spells (one is 100 points of blind which he often casts at the beginning of the fight and lasts for several minutes) and he hits very hard (150 pts of damage) with his Daedric claymore, but doesn't have too much health. Loot the ring from his corpse (a regular ring, with no apparent enchantments).

Take the ring back to Fedris and he will direct you to Gavas Drin instead. Take the ring to Drin and you will be rewarded with a meeting with Almalexia herself in the center of the Temple (High Chapel, which you couldn't enter beforehand). She will take the ring without much ado or explanation unfortunately. Neither Gavas nor Fedris will have any further tasks for you at this time. You are, however, granted a nice new power, Almalexia's Light, which allows you to restore all your attributes by 25 points once per day. After this, Plitinius Mero will call you a fool for retrieving the ring and giving it to Almalexia.