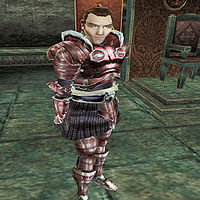 Tienius Delitian is an Imperial guard and the Captain of the Royal Guard. He can be found in the Royal Palace Throne room, where he gives quite a few quests to protect King Hlaalu Helseth. If you kill a Royal Guard, no matter legally or not, Tienius will give a message saying he will have no dealings with you. However, if you have already started one of his quests, you can still continue by clicking on the relevant quest topic. Barring the helm, Tienius wears a complete set of Royal Guard armor. He also carries the unique and powerfully enchanted Gravedigger with him, as well as five exclusive restore health potions. All of which make him very difficult to kill. On the other hand, the captain does not know any spells.