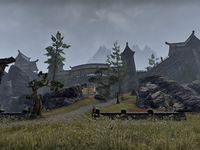 There is a large bridge leading into the fort from the northeast. A Pact Guard patrols the length of this bridge. A trail of empty Argonian bottles leads northwest, across the river and beneath the large stone bridge. Sentry Thod is asleep beneath the bridge, south of the fort's skyshard. Several mudcrabs scuttle in the mud along the river's edge. Darkwater Rabbits inhabit the land northwest of the bridge. If you head further west of the bridge, past an island in the middle of the river with a backpack on it, you'll find several soldiers camped out. Vurila Llethan, Fjar Moonstrike and Steady-Hand are having a contest to see who can be the first to kill Fort Amol's most elusive quarry.

The Pact leaders are camped out in the northeast corner of the fort's grounds. Six Pact Soldiers inhabit this portion of the fort. The Mages Guild has a small tent on the northeastern end of the camp, and the Fighters Guild's larger tent is located on the southwest end of the encampment. There is a table in the center of the camp with dishes and an Order of the Eye Dispatch on it. Thane Jeggi and Odrasa Saram are drinking together at the western end of the table. Margaud Donze, a potential target for Dark Brotherhood contracts, is located at this camp.

Each of the Alliance's three nations have their own campgrounds near this meeting place. Prince Irnskar's tent is the largest one, and lies at the southeast end of the camp, south of the Mages Guild and east of the Fighters Guild. It is red and has Windhelm's banners posted in front of it. Two Royal Bodyguards are guarding the tent, which contains an advanced safebox. A cooking fire lies in front of the tent. There is a table to the right of this tent where the Alliance's representatives meet. Thanes Harvald and Oda are sitting at the table.

The Dunmer have their own camp northwest of the Mages Guild. Three House Indoril Retainers and a familiar servant are accompanying Gelds Indoril to the fort. The Dunmer camp has a cooking fire in it. The Argonians have a camp further west, past the large bridge leading into Fort Amol from the northeast. The camp consists of four tents and a cooking fire. There are many cats at the camp, who seem to be drawn to the Argonians for reasons unknown. Two of the Vicecanon's Sentries are accompanying Argonian representative Runs-With-Quickness to Fort Amol.

Heading south from the Argonian camp will bring you to a stone bridge, which Hloenor Chill-Owl is standing on. This bridge connects the northern section of the fort to the rest of the settlement, and drops you off in front of The Uncanny Alembic, the local apothecary. A Pact Guard stands watch at the light post on the western end of the street where the Merchant Caravans are located. They they pass Marla's House and stop at the junction between the Argonian camp, and the bridge connecting the northern half of the fort with the rest of the settlement, before moving east to stop in front of the bridge leading northeast out from the fort. The guard then enters the camp where the guilds are located before repeating their route in reverse.

If you continue west from the Argonian camp, you'll pass by Marla's House, which is locked until you complete Sleeping on the Job up to a certain point. The Merchant Caravans lie northwest of Marla's House. Gin-Wan, a potential target for Dark Brotherhood contracts, drinks at the stores here and occasionally stands on Marla's porch. If you continue northwest, you'll cross the bridge leading towards the fort's wayshrine. Muslablizs' Booth is located along the northern side of this road.

The fort's barracks lie down the road south from the Merchant Caravans. The barracks are guarded by sentries on the inside, and only soldiers are allowed inside due to protocol. You cannot enter without a Fort Amol Guard Disguise. A wooden bridge heading west is behind the Fort Amol Barracks, on the south side. Fort Amol Home Goods is located on the other side of the bridge, and is right next door to Jofnir's Quarters. Deldwine's Inn lies further down the road south from the barracks. You must cross a stone bridge to reach it. The docks lie west of the inn. A Pact Soldier and two fishermen linger here. If you head east, you'll end up at the apothecary. Itman, a potential target for Dark Brotherhood contracts, wanders up and down the road between the inn and the apothecary.

The Jarl's Manor lies down a road that splits off to the south halfway between Deldwine's Inn and The Uncanny Alembic. The manor sits at the top of the hill, and is inaccessible until you start The War Council. Two Pact Guards are posted on each side of the road at the base of the hill. Hrasvard Axe-Bearer and a Pact Soldier stand in front of the jarl's manor prior to the completion of Sleeping on the Job. 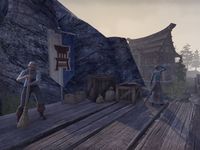 †Appears in this location during the related quest

Fort Amol Wayshrine is located northwest of the fort. Muslablizs' Booth, a guild kiosk, is located along the side of the road near the wayshrine. 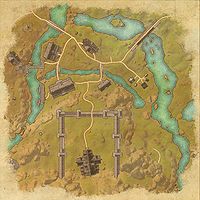 A map of Fort Amol
Retrieved from "https://en.uesp.net/w/index.php?title=Online:Fort_Amol&oldid=2615622"