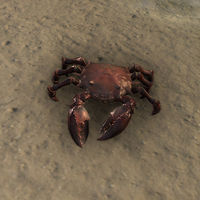 Mudcrabs are small hard-shelled creatures that inhabit almost every shore in Tamriel, whether that be beaches or riverbanks. There are approximately five variations ranging from the common small variant to very large and extremely dangerous variants. Mudcrabs are usually found in small numbers, but on occasion very large groups can be found. Mudcrab nests can be encountered in Hew's Bane. They are also available as pets.

Most mudcrabs are non-hostile but will defend themselves if attacked. They have a simple melee attack, and they may also burrow underground and try to attack you from behind. When killed, they may yield Leather scraps, Carapaces, and occasionally Mudcrab Chitin. If you're lucky, you may even get a Polished Shell Shard, which is needed for the Chitin Accumulator achievement.

A small handful of areas contain hostile mudcrabs, such as in a small pond east of Kragenmoor in Stonefalls.