The UESPWiki – Your source for The Elder Scrolls since 1995
< Online: Quests: Ebonheart Pact / Eastmarch
Jump to: navigation, search
Thane Harvald want Lord Vurlop and I to go into the keep and check on King Jorunn. We need to make sure that the King and his war council are safe.

Thane Harvald fears that the Stormfists spies may try to ambush the king. Lord Vurlop suggested you should make sure the king is safe. Lord Vurlop will unlock the door to let you in.

You can follow Vurlop to the door, or you can head there and he will follow. When you reach the door, it becomes apparent that this was a trap! Two Covenant soldiers appear by Vurlop's side as the Nord nobleman tells you that you're going to die. Suddenly, Naryu Virian appears, dispatches the Covenant soldiers and stabs a fearful Lord Vurlop. When you talk to her, she reveals that she didn't want you to walk into this obvious trap alone. She has been tracking Dhalen, a Breton illusionist who took a contract for Fildgor, and believes he is inside the keep. She promises to meet up with you later, and if you have the Persuasion Perk you can compliment her on her dress.

Enter the Fort Amol Courtyard. You need to find the key to the Jarl's Manor. The courtyard is full of Stormfists, whom you can fight and take the Jarl's Manor Key off of. Once you have the key, enter the manor and talk to Naryu Virian, who has changed back into her Morag Tong gear. She has found two locked doors, but no sign of the king. She surmises he is behind one of them, but you will have to find some way to open them.

Upstairs, in a northern room, is a Note to King Jorunn. The note tells you to look for a warrior blowing a horn. If you climb the stairs to the second floor, you'll see a large statue of a warrior blowing a horn. In front of the statue is another clue: The Quiet Room. Now, head downstairs to the room behind the stairs and examine the Argonian relic in the northeastern corner. It contains the Safe Room Key. The safe room is west of the stairs. Inside, is a purple projection of someone who looks like King Jorunn.

can we get a screenshot of Fake King Jorunn's Projection on this line, please?

"Just look at me! Stunning, am I not? A Breton leading the Nords. Who would have thought it?"

It's Dhalen! He reveals that Vurlop killed Guard Hloenor and that Fildgor will kill King Jorunn. Instead of Jorunn's body, they will find Dhalen the Breton's body—he is the one you are speaking to—and never suspect their brave king. You need to defeat Dhalen. He is upstairs behind the statue but will only appear after you kill fake Commander Yjarnn, who is to the left of the statue. When the Stormfists are dead, enter the vault on the eastern side of the second floor room. Talk to Way-with-Words. The king's meeting was absolutely rigged with Stormfist cronies, and one of them disguised as Jorunn's servant used a daedric concoction to poison Jorunn's meal. She and the Dunmer Pact leader dragged the king upstairs into the vault when the fighting broke out, and if Naryu Virian hadn't arrived, they would all be dead. 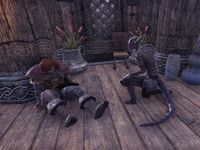 You need to find help for King Jorunn. Talk to Naryu Virian outside the vault. You completed her contract when you killed Dhalen. She has to return to Mournhold, and you need to speak to Prince Irnskar, who has just arrived with Thane Oda Wolf-Sister. The Prince is at the entrance to the manor, flanked several Pact soldiers. He blames the Dunmer and the Argonians because they supposedly "did nothing to protect his father". However, you reply that a Dark Elf and an Argonian are taking care of King Jorunn in the vault. He considers you his ally, at least for now, and prepares to go see his father.

This Online-related article is a stub. You can help by expanding it.
Retrieved from "https://en.m.uesp.net/w/index.php?title=Online:The_War_Council&oldid=1985657"
Categories:
Hidden categories: