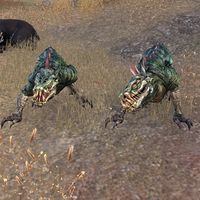 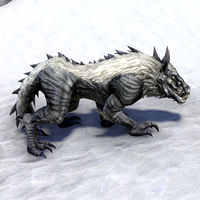 A snow durzog from Wrothgar

Durzogs are hostile reptilian creatures. They are four-legged, dark green, and striped, and have spines along their backs, with six red eyes and long teeth. Upon death they drop clothing materials. They are often found in the company of their goblin masters.

The durzogs in Wrothgar are called snow durzogs, and have steel blue scales and are covered in white feathers. They usually accompany riekrs.