Wrathstone: Uncover Tamriel's buried secrets and begin the Season of the Dragon in Wrathstone. Explore mysterious ruins, face challenging bosses, and claim their riches and knowledge for yourself in two innovative new dungeons: Frostvault and Depths of Malatar. 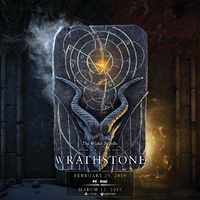 Wrathstone DLC kicks off the year-long event called the Season of the Dragon. Wrathstone is a dungeon pack DLC containing two new group dungeons, inviting you to explore Tamriel's hidden past alongside with Redguard scholar Tharayya and recover two halves of the mysterious Wrathstone.

The DLC is also available for purchase as part of the Wrathstone Collector's Bundle for 040004,000

The loyalty reward for Wrathstone is the Ayleid Royal Crown hat.

The Season of the Dragon has begun! Face ancient Dwarven automatons in Frostvault and discover the fate of a lost Imperial legion in Depths of Malatar. Includes the exclusive Treasure Hunter's Horse Mount, Carnelian Theodolite Pet, and more.