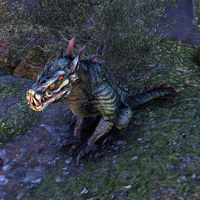 Durzogs, sometimes called sludgepuppies,[1] are carnivorous animals not dissimilar to giant reptilian dogs. They have scaly skin, six eyes, spines and large teeth designed for tearing. Some wild durzogs can spread Rotbone.[2] They are often domesticated by the various goblin tribes for hunting, although their own intelligence can rival that of their handlers.[1][3] Warzogs are a larger breed of durzog, specially bred by goblins for use as war mounts.[4]

Durzogs have a heightened sense of smell, which causes them to seek harpy viscera.[5] When durzogs migrate, the seeds of durzog lichen get stuck between their toes and germinate in areas that they once inhabited.[5] Goblins will occasionally use durzog hide in leather armor,[6] and frozen durzog liver is used in Orcish cuisine.[5] They are intelligent creatures and formidable foes, though they are not very durable in battle.[1] Durzogs have a reputation for being ornery and vicious.[7] With this in mind, goblins have been known to train war durzogs.[8][9]

Snowsnarl Durzogs are pale striped-skinned, feathered durzog species[10] that are know to dwell in cold climates, such as in Wrothgar.[11] The Icereach Coven was known for using magic in the wombs of their mothers, shaping them to be suitable as large mounts known as the Frostborn Durzog Mangler.[12] The Emberthroat Durzogs are quite smart (perhaps even more so than goblins), as the Netch Gouger Goblins of Vvardenfell bred them for their intelligence.[13] Graniteclaw Durzogs are a species native to the Systres archipelago. They are coastal hunters, using their blue and orange strips to blend in with the reefs. Their necks are feathered to keep water from dripping into their eyes.[14]

Durzog ivory has a few practical uses[15], and durzog hide has seen use in fashion products.[16] Durzog meat is valued for its alchemical properties. Durzogs can make loyal pets if a handler establishes firm boundaries with them.[17]