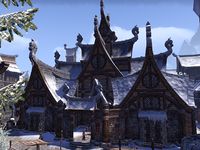 This Fighters Guild is the Windhelm branch of the Fighters Guild situated in the southwestern part of the city. It is a large two-story building with a spacious outdoor area containing a training dummy and two archery targets. Some of the guild members can be found outside patrolling, relaxing or honing fighting skills. Chests and crates for completion of the crafting writs are at the northwestern corner of the building, guarded by two guild members and two non-hostile durzogs.

Inside the building, immediately on the left from the entrance is Sees-All-Colors' room. Upstairs area is a long loft where the hall steward and all three armsmen reside. There are quite a few rooms in the hall with beds, dressers, dining tables, craters and wardrobes. Additionally, four advanced safeboxes can be found within the building.

This Elder Scrolls Online-related article is a stub. You can help by expanding it.
Retrieved from "https://en.uesp.net/w/index.php?title=Online:Fighters_Guild_(Windhelm)&oldid=2004704"
Last edited on 30 August 2019, at 13:24