Online:Council of the Five Companions

I've been summoned back to the Harborage in preparation for our battle against Molag Bal.

The Prophet will appear to you once are close to a major city.

"The companions assemble once more. Travel to the Harborage; it is time for our final preparations."

Once you arrive at the Harborage, you need to speak to Varen Aquilarios. He tells you that by defeating Mannimarco you have destroyed the Worm Cult's power forever. He offers to show you his visions of Mannimarco's eternal torture, if you want to confirm his defeat. If you choose to watch the vision, you will see Mannimarco whipped by ghostly beings while Molag Bal watches. Varen expresses pity for him, then tells you that Sai Sahan wants to speak to you. 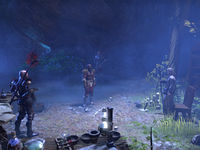 "When Emperor Varen first brought the Five Companions together, he did so in the hope of creating a Tamriel where all men could live freely and safely under one banner. The Five Companions failed, betrayed from within by one of our own: the Worm King Mannimarco. All that came after was the result of one man's treachery. Now four of the five are reunited to right that great wrong. But destiny requires a fifth."

Sai Sahan offers you the chance to become the fifth member of the Companions, an offer you can accept or refuse. If you accept, Sai Sahan will declare you the last and strongest part of the blade forged by the Companions' friendship and loyalty. Varen notes that you fulfill the Elder Scrolls prophecy: you are the brightest of five stars and will guide them to the dawn.

A Drink With a FriendEdit

Lyris Titanborn calls you over. She worries this may be the last time you two can speak as friends. You can tell her what you think you will do in the future: fight in Cyrodiil, explore Tamriel, or that you need to focus on the task at hand. She will tell you her plans, as well. Next, she wants to ask you if you have any regrets. You can say you have none, the deaths of others weigh on you, or you regret not seizing power when you could have. She has lots of regrets, but she mostly regrets not getting to know the people she fought with. For her final question, she asks you if you like mead. If you say yes, she will toast to the defeat of Molag Bal, which you can accept or refuse.

The Price for Saving TamrielEdit

Next, Abnur Tharn calls you over. He thanks you, in a roundabout way, for stopping Mannimarco. He says you need to join the forces gathering to stop the Planemeld, then defeat Molag Bal and take back your soul. He will need to perform the same ritual that caused the Soulburst, this time with you in Coldharbour. However, the power to defeat a Daedric Prince comes with a price—one of the Companions (not you or Abnur Tharn) has to die.

Each of the potential candidates presents their idea for why they should be the one to be sacrificed, but you do not have to decide now. First, you need to stop the Planemeld.

The Final Journey to ColdharbourEdit

"When the Planemeld has been thwarted and the dust has settled, the Five Companions shall gather one last time to face our destinies. The God of Schemes must be stopped, Vestige. That is the only thing that matters now."

He gives you a reward, and you now need to join the forces invading Coldharbour. If you have not yet completed the Alliance Story, Vanus Galerion will kick off the invasion with Messages Across Tamriel when you next enter a safe area. You will need to complete the Coldharbour zone story before the final Main Quest is unlocked.