The Prophet contacted me through a magical projection. He asked me to seek out a place called The Harborage, where he has taken refuge. I should go to him and ensure that he is safe.

The Prophet will appear before you as soon as you enter a safe area, such as a city. Talk to him to hear about a safe place from which you will be able able to plan how to defeat Molag Bal. The Prophet calls this place "the Harborage."

For those starting in Vulkhel Guard (Aldmeri Dominion), the Harborage is directly east from the docks and close to the Auridon coast. The Harborage is in a seaside cave.

For those beginning in Davon's Watch (Ebonheart Pact), the Harborage is west of the city and slightly south. If you get to Shipwreck Strand, a boss location on the coast, you've gone too far west.

If you start in Daggerfall (Daggerfall Covenant), the Harborage will be east of Bazgara's Horses, the Daggerfall stables.

"Welcome to the Harborage, Vestige."

The Prophet says you need to understand how events came to be before you can learn more about your destiny.

Visions of the PastEdit

"Enter my mind, Vestige, and walk with me through the shadows of past events."

The Prophet opens a portal to a Coldharbour-like realm and walks along the path while recounting his story. 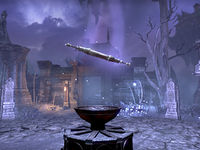 The Elder Scroll and the Dragonfire Brazier

"My part in the story began when I awoke on the steps of the Abbey of the Moth Priests, with no memory of my past life. The Moth Priests took pity on me and brought me into their fold. I was weak and near death. It was there that I first set eyes upon the Elder Scrolls, and devoted my life to their study."

At this point, you and the Prophet pass a brazier with an Elder Scrolls spinning above it.

"The Scrolls allowed me to glimpse the very fabric of reality, but each profound insight dimmed my vision and eventually left me permanently blinded to the light of the world."

He stops, and you need to talk to him again. He says your destiny is intertwined with the Five Companions, a band of adventures who sought out the Amulet of Kings to persuade Akatosh to accept their leader as Dragonborn. The leader was Varen Aquilarios, "the son of a Colovian duke, who led a rebellion against the Emperor Leovic" and crowned himself emperor. 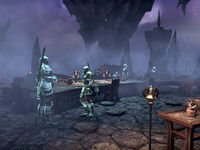 "The first Companion, Lyris Titanborn, daughter of giants, was the greatest warrior in the service of the Empire. Next, Abnur Tharn, a powerful sorcerer and Grand Chancellor to the Imperial Elder Council. The Redguard sword master Sai Sahan, leader of the Imperial Dragonguard. The Imperial Emperor, Varen Aquilarios, who attempted to light the Dragonfires and failed. And finally, Mannimarco the traitor. The King of Worms. A powerful necromancer, and your executioner."

Talk to the Prophet again after he finishes describing each of the Five Companions. He says Mannimarco convinced Varen that the Amulet of Kings could be used to rekindle the Dragonfires. According to Mannimarco, the Emperor could perform a ritual that would please Akatosh enough to make him Dragonborn.

After you finish talking to the Prophet, walk back to the area where you saw the Elder Scroll earlier. The Companions enter and begin the ritual. 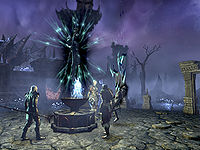 Varen Aquilarios: "There it is. The Dragonfire brazier. Mannimarco, you're certain this will work?"
Mannimarco: "It will work, my liege. The Amulet of Kings will rekindle the Dragonfires, and ensure your rightful place as Emperor. You have my word."
Lyris: "It better work, Mannimarco, or you'll find your neck at the business end of my axe."
Abnur: "My Lord, I wonder if you'd muzzle your half-giant pet? She really is annoying."
Sai: "Enough, both of you! We are here to ensure My Lord's rightful claim to the Ruby Throne."
Varen Aquilarios: "Abnur, begin the ritual. I have a destiny to fulfill."

Abnur Tharn steps up to the brazier and holds out the Amulet of Kings. Flames shoot out of the amulet, lighting the brazier. Varen prays on the other side.

Varen Aquilarios: "By the lighting of the Dragonfires, I claim my rightful lineage! By the fires of creation, let me be reborn! By the will of Akatosh, I proclaim myself … Dragonborn!"

However, Mannimarco steps forward as Varen is lifted screaming off the ground by dark magic. Mannimarco floats up above the brazier.

Mannimarco: "Varen Aquilarios, you are no heir to Alessia! You will pay for your sacrilege! The veil between Tamriel and Oblivion tears and splits asunder!"
Abnur: "What's happening? The sky is opening up! This is bad! This is very bad!"
Varen Aquilarios: "This isn't supposed to happen! What's the meaning of this? Mannimarco, what have you done?"
Mannimarco: "Gullible fools! The veil between Oblivion and this world has been torn! My master, Molag Bal, is free to claim Tamriel for his own!"
Varen Aquilarios: "Akatosh! Forgive me! Have mercy on our souls!"

Talk to the Prophet again, after the scene finishes. 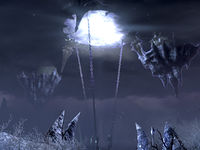 One of Molag Bal's Dark Anchors

Follow the Prophet through the southeast arch. A Dark Anchor appears as you follow him down the path.

"Molag Bal's Dark Anchors pierce the torn veil, and seek to draw Nirn into the depths of Coldharbour."

The Daedric prince's ultimate goal is to merge Nirn and Oblivion, an event known as the Planemeld. The Prophet says few would survive it, and those that did would be enslaved for all eternity.

Talk to the Prophet again to return to the Harborage.

The Beginning of the StoryEdit

Talk to the Prophet again in the Harborage.

You need to train and gather strength to assemble the Companions. The first one, Lyris, you met in Coldharbour. However, the Prophet needs time to determine her exact location. He promises to contact you again "when the time is right" and gives you a reward.