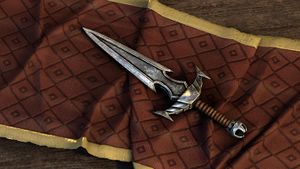 Mehrunes' Razor (sometimes Mehrunes Razor), also called the Dagger of the Final Wounds, the Bane of the Righteous, and the Kingslayer,[1] is a Daedric artifact created by the Daedric Prince Mehrunes Dagon. This powerful ebony dagger has the ability to kill instantly, [2] as there is a small chance that Dagon will claim the souls of those struck by the Razor.[3] It is Daedric in appearance, emblazoned with Daedric script and seemingly able to drink the light that hits it.[4]

In the Second Era, an Argonian named Trouble-Finder reported coming across a cheap dagger for sale in Ebonheart. It is unknown whether this was actually the Razor, but several cultists believed it was and chased him down for it.[5] Circa 2E 582, Mehrunes' Razor had been shattered into several shards.[4] It was also seen at that time in the possession of a Bosmer woman named Gilraen, a native of Whisper Grove. The city was sacked by a servant of Dagon, Razor Master Erthas, who opened an Oblivion Gate within the city. Seeking to protect her family, Gilraen entered the Deadlands and made a pact with Dagon; she would remain in the realm as a Razor Master, and Whisper Grove would be protected from the Daedra in return. This pact allowed Gilraen to survive indefinitely in the Deadlands, where she visited her wrath upon the region known as the Knives of Discord. However, her husband Fingaenion reopened the Oblivion Gate in a failed attempt to find and rescue her. In doing so and subsequently being menaced by Daedra, he unknowingly broke the pact. After taking the Sigil Stone and sealing the Gate permanently, Gilraen was free to return home to Tamriel, still in possession of Mehrunes' Razor.[6]

It is said that the Telvanni master of Sadrith Mora, Neloth, was once in possession of the blade and used it to inspire his troops in battle against the rival Telvanni master of Tel Aruhn, Gothren, before it was stolen by a troupe of acrobats whom he had wronged. The troupe used the dagger for a time in their acts, Master Mearvis in particular using it to turn marshmerrow reeds into papyrus.[7] Circa 3E 325, the Dark Brotherhood was decimated by a vicious internal power struggle, and it is suspected that the Razor was involved.[8]

Around the time of the Warp in the West, an unknown agent of the Blades was given the weapon by Dagon for slaying a rebellious frost atronach.[9] In 3E 427, the Nerevarine recovered the Razor from Alas Ancestral Tomb, where it lay disused and rusted by the corpse of Varner Hleras. In return, Dagon imbued the Razor with his power and returned it to its former glory.[10]

In 3E 433, a rogue Telvanni Arch-Mage named Frathen Drothan assembled an army of mercenaries and searched for the Razor in Sundercliff Watch, an abandoned Imperial outpost and iron mine. It was rumored that the entrance to the ancient Ayleid city of Varsa Baalim had been uncovered, and with it the Nefarivigum. This was an evil construct of Mehrunes Dagon, created to test pilgrims seeking the Razor. Msirae Faythung, a previous champion of Dagon, stood guard over the Razor after having failed the Prince. As punishment, the Kyn cut open his chest to reveal his heart and cursed him to stand statue-like in the Nefarivigum for eternity. Drothan decrypted the runes in the Nefarivigum, which summoned the Razor, but before he could recover it the Champion of Cyrodiil defeated him and claimed the dagger.[11].

After the Oblivion Crisis, a group devoted to eradicating the Mythic Dawn from Tamriel stumbled upon the Razor. They broke the Razor into pieces and divided them between the three most senior members of their order, pledging to keep the pieces safe. They renamed themselves "The Keepers of the Razor" in honor of their new role.[12] The hilt, pommel, and blade shards of the Razor were passed down through the Keepers' descendants, but the scabbard was not.

Despite being broken, the complete Razor was reportedly seen circa 4E 180 when a former member of the Blades, the Warrior, came across it. The method of its acquisition is conflicted, however; some claim that it was obtained from the plane of Oblivion known as the Abyss, while others believe it was looted from a chest.[13]

In 4E 201, the Last Dragonborn was contacted by Silus Vesuius, a Dagon enthusiast trying to establish a Mythic Dawn museum, who had found the scabbard. He hired the Dragonborn to collect the three missing pieces. The two journeyed to a shrine to Mehrunes Dagon to have the Razor repaired. Dagon demanded the life of Silus Vesuius in return. Vesuius offered the Dragonborn gold to ignore Dagon's request, wanting to add the shattered pieces to his museum if he couldn't have the restored artifact. It is unknown whether the Dragonborn accepted his offer or killed Vesuius and claimed the dagger.[14]