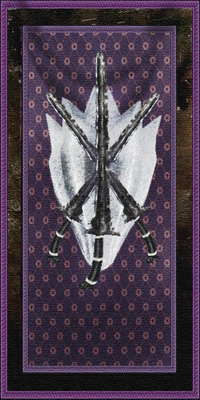 The banner of the Mazken in Shivering Isles

The Mazken[1] (also known as Seducers, Dark Seducers, or Daedra Seducers) are a Daedric race who resemble scantily-clad humanoids.[2][3][4] Some Mazken have humanesque skin tones,[2][3] while others are marked as Daedra by more unusual shades such as blue, gray,[5] or dark purple.[4] A few also possess large, retractable, bat-like wings.[2][3] They have Blue and Green eyes.

The Mazken are the spawn of Sheogorath, and their home is Pinnacle Rock in Shivering Isles. Pinnacle Rock contains the Wellspring of the Mazken, which serves as a beacon to guide the souls of the seducers lost in the Void back to the Isles. Details surrounding their chaotic Creatia is a mystery, but their Wellspring flows with a green liquid fitting of them.[6] Many of the Mazken are notoriously clanless and treacherous, owing allegiance to many Daedric Princes, such as Mehrunes Dagon,[3] Molag Bal, Meridia, and Nocturnal.[7] Male Mazken are notably weaker than their female counterparts and because of this, Mazken society views all males as inferior. Unlike their counterparts, the Golden Saints, Dark Seducers are generally polite and patient when interacting with mortals.[8]

The Mazken make up one half of the Madgod's army, along with the Aureal. The two groups have a great rivalry, each believing they are Sheogorath's favored. The Mazken are charged with guarding Dementia, apparently due to a masochistic streak.[9] In times of peace, they act as guards, patrolling the realm for criminals and hostile creatures. In times of war, they favor blunt weapons and are placed under the command of the Duke of Dementia. The Mazken have a strict hierarchy, ascending in rank as follows: Kiskengo; Kiskella; Kiskedrig; Grakendo; Grakella; Grakedrig; Autkendo.

The Mazken are linked to the Madness Ore that occurs naturally in the Shivering Isles. Experimenting with Madness Ore may summon or even bind a Mazken.[10]

In combat, the Mazken wear strong but extremely revealing armor that exposes most of their skin to the elements, although this is compensated by their fast running speed and strong resistance to magical attacks. Crafting their serpentine arms and armaments is a dangerous endeavor, as one can lose their mind making it. The process requires finesse as one must balance shaping ebony with malleable quicksilver. Heat must be applied precisely, or the shape and integrity of the equipment will be ruined. Finally, a Daedra's Heart is put into the forge when the equipment is being heated, adding to its hardness.[11] The intricate artifact Ruin's Edge is a dark Mazken bow that belonged to Syl, the Dutchess of Dementia.[12] The Mazken longsword Serpentstrike is known for being highly venomous, leading to speculation that it was tempered with the blood of Basilisks.[13]

Sometimes they do not use their serpentine equipment, and have been known to wear revealing black outfits and use their alluring form to trick mortal opponents into mistaking them for harmless human women before striking down their unsuspecting adversaries with ease. However, they have sometimes exhibited a willingness to behave passively around mortals that understand the Daedric language to a certain degree.[14]

Many Mazken were in the service of Molag Bal during the events of the Planemeld. Among the most infamous were dubbed the Seductive Sisters, which consisted of the seducers known as Dylora, Vika, and Jansa. They were considered the most deadly Mazken in Molag Bal's service,[15] and served as generals for his invading forces.[16] They were tasked with protecting Dark Anchors, but were slain by the Fighter's Guild that sought to destroy them.[15]

Many who sought refuge from the horrors of Coldharbour were lured into the Manor of Revelry, a mansion cloaked in the illusions that mimic the familiarity of Hammerfell. There, they were greeted by the Mazken sisters, Nuzara, Rayyaima, and Shayaifa, who lured their guests by feeding them and providing a luxurious experience. In reality, the guests were being pampered so that they were fattened and lowered their guards so that they could be consumed. All that was left was their skeletal remains, which were then reanimated and cloaked within the illusion to appear as living guests. Circa 2E 582, the Tamrielic Invasion of Coldharbour was launched, and members of the expedition were scattered throughout Molag Bal's realm, and some of the members wandered into the comforts of the Manor. A Mazken agent of Meridia, Fatahala, knew well of how her kind operated, and sought the help of the Vestige to dismantle the illusion of the Manor and save its still living inhabitants.[17]

The Invasion of the BattlespireEdit

During the Daedric invasion of the Battlespire, Mehrunes Dagon recruited many Mazken to his ranks. They turned on their previous mistress, Nocturnal Lieutenant Jaciel Morgen, and captured one of their (former) patron Nocturnal's realms, Shade Perilous, for Dagon. Those who willingly shifted their allegiance were rewarded by being remade in the image of Dagon's own greed and treachery—becoming not only physically stronger, but also gifted with powerful bat-winged forms.[18][19]

The Mazken attacked the Battlespire, each wielding a Daedric Crescent, before retiring back to Oblivion and leaving the scamps and vermai to clean up. Other Daedric clans, notably Clan Dremora and their master Imago Storm, were displeased with Dagon's acceptance of the Mazken. Dagon himself held no such prejudices, and assigned some of them into important positions. The seducer Si'ess was given the role of Master of the Hunt, and oversaw the Chimera of Desolation's Great Hunt. He went as far as taking a Mazken as his bodyguard and lover, and gifting her with the Sword of the Moon Reiver. This bodyguard was slain by an apprentice, who then used the sword to banish Dagon, destroying the Battlespire in the process.[3]

Following the destruction of the Battlespire, winged Mazken were regularly sighted in the Iliac Bay area in the years leading up to the Warp in the West.[2]

The Daedric Prince Malacath was betrayed by a Mazken whom he had gifted with power and beauty. The Prince had a mysterious agent of the Blades track her down to a dungeon in the Iliac Bay area and slay her in return for Volendrung.[20] The agent was also tricked by an Orc warlord into taking a Daedric lodestone from a Mazken, with the promise of the artifact Chrysamere, which the warlord did not possess. The Mazken revealed the Orc's plot to the agent, providing a magical pearl to break the illusion, but the ultimate result of this conflict is unknown.[21]

Also of note, Princess Elysana of Wayrest contracted the agent to return a robe she borrowed to Lord Castellian, the senior member of Wayrest's elder council, while he was on holiday. Castellian had the ear of Elysana's father, King Eadwyre, and made no secret of his desire to wed the princess. Perhaps due in part to these facts, Elysana had the robe enchanted so that when worn, it would summon a small horde of Mazken to attack and kill the wearer. It is unknown if Lord Castellian ultimately received it or if the agent decided to try it on; regardless, the Daedra were sent back to Oblivion, taking the cursed garment with them.[22]

By 3E 433, the Dark Seducer Sisters, Dylora, Vika, and Jansa, had changed their allegiance from Molag Bal into serving Sheogorath. Jansa became the Captain of the Palace Guard of New Sheoth, and Vika became interested in the conflict of Cylarne. That year, Dylora was serving as the commander of Mazken's home of Pinnacle Rock in the Shivering Isles when the Greymarch began. The forces of Order invaded Pinnacle Rock to cripple the realm's army, and Dylora was taken prisoner.nb1 She was freed by Sheogorath's Champion and aided in the liberation of the stronghold. Although she perished with the other Mazken when the Wellspring of the Mazken was frozen by Order, they were revived when the Champion destroyed the crystals stopping the flow of chaotic creatia. Dylora would then lead the Mazken to remove any remnants of Order from their home, allowing them to resume their normal duties.[23]