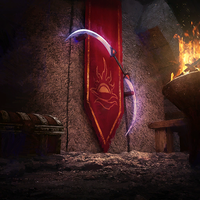 The Daedric Crescent Blade is a Daedric artifact created by the Daedric Prince Mehrunes Dagon. It has the power to paralyze those it strikes, and puts heavy wear on their armor; it has also been known to create a green ball of energy, but its effects are unknown. There were once many Crescents, which were used by Dagon's forces to take the Battlespire during the Imperial Simulacrum. When the Empire later reclaimed the ruined academy, the Crescents were gathered up and destroyed - all but one. Unknown to the Empire, one of the unique blades remained in existence somewhere in Tamriel, although none had ever seen it.[1]

In 3E 427, this last Crescent was discovered by the Nerevarine. It had been in the possession of Lord Dregas Volar, a Dremora who dwelled in the Daedric shrine of Magas Volar, a Daedric sanctuary inaccessible without teleportation. Divayth Fyr of Tel Fyr had come to possess an amulet which would teleport the wearer to the hidden shrine; the Nerevarine used the amulet and defeated Lord Volar, claiming the last known Daedric Crescent.[2]