The Isles, taken by Order

The Greymarch is an event that happens at the end of every era in the Shivering Isles, intended to wipe out the entire realm so that Sheogorath must rebuild it. It starts with the appearance of large crystalline obelisks that emerge from the ground. These obelisks produce and are the power source of Jyggalag's minions, the Knights and Priests of Order.[1][2] The Greymarch is the end of the cycle that the Daedric Princes cursed Jyggalag to endure every era.[3] It is characterized by irresistible brute force, with very little in the way of subterfuge or any variation to previous methods.[1][2] 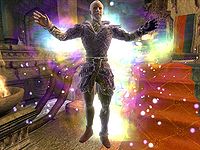 It is unknown when the Greymarch first began. Long ago, before recorded time, the Daedric Prince of Order, Jyggalag, was growing in power and influence, spreading across realms and dimensions.[4] The other Princes, growing fearful of Jyggalag's power, cursed him to become an embodiment of what he hated most: chaos and madness. The Prince of Madness, Sheogorath, was born that day. Sheogorath turned Jyggalag's domain into the Shivering Isles, a realm reflecting his madness, and once every era he would become Jyggalag once more to destroy the Isles and reclaim his realm. With that accomplished, he would transform back into Sheogorath, who would be left to rebuild his realm.[1]

Jyggalag's return to the realm

Sheogorath has attempted several methods to halt the Graymarch, including summoning mortal champions to the Shivering Isles to fight back against the forces of Order. Sheogorath then disappears to become Jyggalag. The Greymarch ends when Jyggalag destroys the Shivering Isles,[1] Its unknown if all such mortal champion mantles the role of the Mad God as only one has ever successfully beat Jyggalag and ended his curse.[5] It is possible that Arden-Sul was a mortal who had mantled Sheogorath previously, as suggested by the beliefs of the Zealots and Heretics,[6][7] Haskill a Vestige who serves as Lord Sheogorath's chamberlain, came about from such a mantling.[8] Other methods Sheogorath has used to try and stop the Greymarch include filling up a pit with clouds or clowns.[1][9]

Few mortal inhabitants of the Isles ever live to see a second Greymarch; although they do not age without Sheogorath's will, few seem to survive the event.[5][8]