This article is about the castle on Vvardenfell. For the city on the mainland, see Ebonheart. 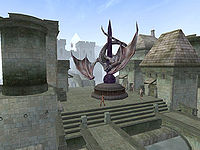 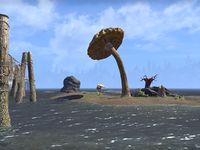 The future site of Ebonheart circa 2E 582

Castle Ebonheart (or Ebonheart, after the mainland city of the same name) was the seat of Imperial authority in Vvardenfell. From this city, the Duke of Ebonheart, Vedam Dren, and his Grand Council determined law and policy for the Vvardenfell administrative district. The Imperial Chapels served the Duke, his retainers and the castle's garrisons, and were also an administrative center for Imperial Cult presence.

An Imperial Guard unit protected the Duke, and the Hawkmoth Legion was also garrisoned within the walls of the castle. Much of the business in Vvardenfell, which concerned either the Empire or House Hlaalu, was conducted in Castle Ebonheart, as the Hlaalu Grandmaster was the Duke himself.

Because the East Empire Company was chartered directly by the Emperor, its offices, warehouses and docks were adjacent to the castle, and its security was assured by the Imperial garrisons. The provinces of Skyrim and Black Marsh maintained diplomatic missions in Ebonheart, the latter mainly in concern for its citizens, due to the fact that the Morrowind province was exempt from the abolition of slavery.

After visiting the mainland Ebonheart in 2E 582, Vivec was so enthralled by the city that he decreed that either the city be moved to Vvardenfell, or a new Ebonheart be built on the island in emulation of the original. The Tribunal canons and House Hlaalu engineers, who were already overseeing the ongoing construction of Vivec City, were immediately directed to draw up plans to fulfill Vivec's wishes.[1]

Centuries passed before those plans bore fruit, however. It was only after Vvardenfell was opened for settlement in 3E 414 that Castle Ebonheart was finally built to serve as the new Imperial capital of the island.

Due to the proximity of the fortress to Vivec City, it can be assumed that it was obliterated by the fall of Baar Dau in 4E 5, the Red Year.[2]