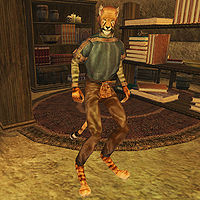 Jobasha is a Khajiit bookseller who is the proprietor of "Jobasha's Rare Books" in the western corridor on the upper level of the Lower Waistworks in Vivec's Foreign Quarter. His shop is stocked with many rare books and is guarded by an Ordinator, who was sent by Duke Vedam Dren himself, according to Jobasha. He is both directly and indirectly involved in many quests that require rare books. He is also an active abolitionist and works closely with Ilmeni Dren. In his store you can find "Charles the Plant", a unique potted plant that produces "Meteor Slime".

He is wearing a common shirt with matching pants. Like all Khajiit, he can see well in the dark and can demoralize others for short periods. Aside from that, he knows: Divine Intervention, Mark, Recall, Detect Creature, and Detect Key.

Book needed: Confessions of a Skooma-Eater

Books rewarded: The Armorer's Challenge, Realizations of Acrobacy, and The Marksmanship Lesson

At some point during your quest to become Ahnassi's "special friend", you are asked to cure another Khajiit, J'Dhannar, of his skooma addiction. Since J'Dhannar himself seems to think that his situation is hopeless, the best course of action appears to be to find some way to convince him otherwise, and what better way to do that than by offering him a book that recounts the tale of someone who has overcome her addiction?

Once you have found an architect who is willing and able to reconstruct Boethiah's Shrine, you will need to find a book for him to draw inspiration from. As more often, Jobasha has what you need:

If Baladas Demnevanni is to join the Telvanni Council, you will first need to perform a favour for him by bringing him three books on his subject of choice, the Dwemer. Jobasha sells two of these books and knows where you can buy the third one:

Mentioning the topic "Twin Lamps" to Jobasha after you have freed at least thirty slaves across Vvardenfell prompts Jobasha to thank you for your good deeds and to reward you with some valuable books:

After you have completed the quest, Jobasha has the following to say about the topic:

Since Jobasha has many books that are hard to come by, it makes sense to ask him if he can help you to acquire a copy of Galur Rithari's papers. Although he does not have a copy of the papers, Jobasha does have a tip on where you may find one:

Even though Jobasha is not directly involved in this quest, it is possible to ask him about Huleeya, who apparently is his friend. He has, however, very little to say about him:

Obviously, Jobasha is very upset if you, for whatever reason, decide to kill Huleeya:

Skink-in-Tree's-Shade wants you to bring him a rare book on vampires in Vvardenfell. Whoever could help you with such a task?