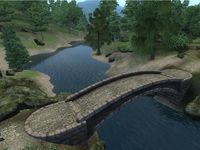 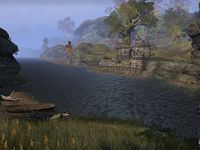 The Corbolo River is one of the largest tributaries of the Niben River, which it joins at the northeast corner of the Niben Bay. The river extends further north in the wilderness until it reaches a fork that connects to the Reed River, which empties from the Valus Mountains in the northeast and the stream that empties from Lake Poppad in the northwest. The Yellow Road runs over the river via the Crestbridge, right next to the ruined Fort Cedrian. The county seat of Cheydinhal is found on the banks of the Corbolo,[1] and the settlement, Drakelowe overlooks the river valley near the fork. It is next to a large drawbridge that leads deeper into the Nibenay Basin.[2]

As you move further inland from the Niben Bay, the river turns into a valley surrounded by willows by the time you passed the Crestbridge and the flooded Fort Cedrian. Before the first turn toward the north, several isolated jetties mark steep and winding paths that lead to caves like Cyanfish and Wenderbek, and even the little cabin of Drakelowe. North from there is the fork that leads either toward the Reed River and Lake Poppad.[3] When the Alliance War ravaged throughout central Cyrodiil, the Corbolo River marked the border between the main battlefield to the outer reaches of the Nibenay, which was largely untouched by the conflict. Both sides are connected by a large inactive drawbridge. At that time, Drakelowe Keep stood tall over the river valley, at the site of a former settlement, in the Ebonheart Pact's territory.[3]

People in the docks of Bravil say that Newt Cave, near the mouth of the Corbolo is an ideal base for a smuggling operation.[4] Like other rivers in central Cyrodiil, there is a variety of fish in the river, which includes river fish such as the Glassfish, the Nibenay Trout, and the Pirate Perch, but also lake fish like the Rainbow Fish, the Yellow Perch, and the Runmare Bream.[3] There are several landmarks throughout the Corbolo River, however, they are found on the hills or slightly deeper into the forest, such as a Hestra Runestone, the Shadow Stone (one of the Standing Stones of Cyrodiil), and a couple of defunct oblivion gates.[2]

Pirates from the Southern Sea have been known to travel far north into the Corbolo River and the Bravil region in the mid-Second Era. They would raid homesteads and capture barges back to back down the Niben River.[5]