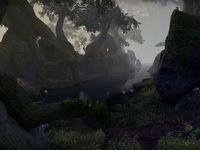 The Xylo River is a waterway flowing partially along the traditional border between Valenwood and Elsweyr. It begins in the Malabal Tor region of Valenwood, and its mouth is at a location known as Shaasanath Point.[1][2] The river has been known to switch hands between the Bosmer and Khajiit.[3]

At last report in 3E 432, Elsweyr gained territory on the western bank of the river after the Five Year War, and though a diplomatic attempt was made to return it, Khajiiti settlers in the area were refusing to move. The Empire thus decided to leave the situation as it was.[3] The river purportedly maintains a fairly mild temperature even in wintertime, allowing for year-round swimming.[4]