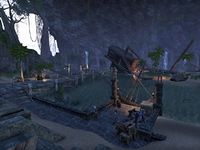 A Cove in the Southern Sea

The Southern Sea is the body of water that laden the southern coast of Tamriel. It is a part of the Padomaic Ocean and it meets both the Cape of the Blue Divide and the Sea of Pearls in the west. Its waters empty out into the Topal Bay and the Oliis Bay.

The Southern Sea encompasses large cities that are vital in trade, such as the harbor-city of Senchal, or the trading-towns of Lilmoth and Southpoint. Compared to the corsairs and pirates of the Abecean Sea, the ones in these seas keep a much lower profile, to avoid the passing Altmer and Maormer warships. A large portion of these seafarers are Khajiit.[1]

The province's southern coast is shared between the Southern Sea and the Topal Bay. The only cities on the former are the towns of Lilmoth and Soulrest, though the latter is found between both of the bodies of water. This area of Black Marsh was once occupied by the nomadic Beastfolk known as the Lilmothiit, though little of their civilization remains throughout the coast.[2] In Murkmire, the region where Lilmoth is located, the land gives way and fades into the water. Legend has it that Murkmire extended further south but was swallowed by the Southern Sea.[3] There are scattered ruins across the coast and floating villages like Alten Meerhleel, or even Lilmoth. The island of Norg-Tzel is found off the coast, southeast of Lilmoth.

The region of Pellitine holds the province's coastline through the jungle treetops of the Tenmar Forest. The land extends southeast into a region known as the Quin'rawl Peninsula where the aforementioned city of Senchal is located. Since ancient times, Senchal has been known for its harbors and nautical people.[4] Which gave way to their success as one of the largest trading cities on Tamriel. Senchal is the Southern Sea's gathering spot for pirates, buccaneers, and all sorts of seafarers looking for illicit goods.[5] Another city on the Southern Sea is the home of the Mane, Torval. The Khajiit of Torval often exploited the bounties of the sea, trading it with the ancient kingdom of Ne Quin-al.[6] The Halls of Colossus are found on the south coast.

The island of Khenarthi's Roost is found off the province's coast, southwest of Senchal. Like Senchal and Torval, Khenarthi's Roost was an ancient kingdom, known as Khenarthia. The ancient Khajiit were experts in harvesting Moon Sugar, which is often grown on Elsweyr's coast, as well as, expert fishermen.[4] The town of Mistral is the island's largest settlement, and it is surrounded by a large ravine where the Southern Sea fills in.

The region of Grahtwood is found along the southern coast. The cities of Haven, Greenheart, and Southpoint are found on the Southern Sea. Where the sea meets the Cape of the Blue Divide is uncertain. The coast is largely unpopulated, save for these cities as most of the coast is covered in large mountains. The town of Greenheart is the only one of these cities to not have a port, as it is nestled deep in the mountains. The Cave of Broken Sails, is a large cove found between Haven and Southpoint. It is one of the many hidden pirate bases found along the Southern Sea.[1] The region that encompasses Haven, Southpoint, and the Cave of Broken Sails is known as the Long Coast.