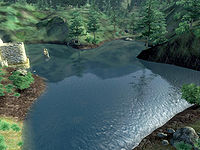 Lake Canulus is a small lake in the far east of Cyrodiil, between the Silverfish and Panther Rivers. It is surrounded by old forts, mines, camps, and caverns. A great monastic complex of the Alessian Order that contained documents dating back to at least the mid-sixth century was once built along its shores, but it was razed during the War of Righteousness, and much of its archives were destroyed.[1][2] The Ayleid city of Varsa Baalim was located near the lake before it plunged into the ground in the early First Era.[3][4]