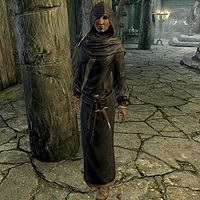 Madena, a Breton destruction mage, is a citizen of Dawnstar and serves as the court wizard to the Jarl of Dawnstar.

Madena reveals that she is a veteran of the Great War between the Empire and the Aldmeri Dominion and recounts what she witnessed. She became horrified by the use of her spells during a battle, which killed every Thalmor soldier in the fight, and she vowed to never use destructive magic again. However, if attacked, she will break that vow.

She wears blue mage robes and a pair of boots. She is equipped with an iron dagger, and carries a selection of common loot and gold.

This is the merchandise found in Madena's merchant chest. These items are only available if purchased from the merchant; they cannot be pickpocketed or stolen. They are restocked every two days.

She may greet you with one of several lines.

"I'm here to lend my magic to the people of Dawnstar."

"I had hoped life would be simpler here, but war seems to find a way of following me."

"I'll work my spells and potions for whoever is willing to leave Dawnstar in peace."

"I served in the Great War as a Legion battlemage. I've no desire to go back."

You can ask her about her profession and her past.

Are you the court wizard?
"If you can call it that. The Jarl can make all the demands in the world, I'm not setting one foot on the battlefield. I cut enough lives short in the Great War. I'm not going to do it again."
You mentioned the Great War.
"About 30 years ago, the Aldmeri Dominion invaded the Empire. It was a surprise attack, caught everyone off guard.
They ended up sacking the Imperial City. I was there, blasting apart young Elven men and women with Fireballs and Lightning Bolts.
By Akatosh, all the blood. The smell of flesh burned and pulled apart by magic. I never want to do that to another soul ever again."

She can also point you towards the College of Winterhold.

Where can I learn more about magic?
"Magic is... frowned upon in Skyrim. Only the mages at the College of Winterhold teach it freely. If you wish to learn, join them. "

When you exit conversation, she may sarcastically say:

"Back to another fine day in Dawnstar."

She has a unique greeting if you speak to her before the situation with the nightmares is resolved.

"If you're here about the nightmares, I'm afraid my pleas to the College of Winterhold go unheard."
What's this about nightmares?
"You haven't heard? All of Dawnstar hasn't had a decent night's rest in days.
People are having nightmares they swear are real. They go to bed, but they wake up more tired than yesterday.
I've heard that a priest of Mara has come, saying that the Divines will lift this curse somehow, but that remains to be seen."

Pieces of the PastEdit

If you go to Dawnstar after receiving a museum pamphlet from a courier, you can see her and Silus Vesuius, the museum owner, arguing:

Madena: "Your ancestors wouldn't want this, Silus!"
Silus Vesuius: "Why should I hide from it? This is my family's legacy!"
Madena: "It's the past! Dead oaths on dead lips. Let it stay there."
Silus Vesuius: "The museum is opening, Madena."

Madena then gives up and walks away. When she notices you, she asks you not to humor Silus. You may ask her who Silus is and what this museum is about. Madena can also tell you a little bit about the Mythic Dawn.

"That museum is a mistake."

"I beg you, don't go into Silus's museum."
Who's Silus? What's this museum?
"Silus comes from one of the oldest families in Dawnstar. They have a complicated history.
Several of his ancestors belonged to the Mythic Dawn, the cult that almost destroyed Tamriel.
His family's involvement was only found out well after the crisis had died down, but it still ruined their reputation. They were outcasts.
And now Silus is back and this museum to the Mythic Dawn is his way of trying to rebuild his family's pride. It's misguided."
The Mythic Dawn? Who are they?
"Not a student of history I see. It's for the best. They're a group that should be forgotten.
The only thing you need to know is that they almost destroyed the world, and they were stopped. A long time ago."

The initial jarl, Skald, will deny Madena's requests to leave for High Rock to escape the civil war, and will try unsuccessfully to get her to fight as a battlemage for the Stormcloaks.

Madena: "Skald, I've been meaning to ask you for a leave of absence. I wish to return to High Rock until this war is over."
Skald the Elder: "You wish to leave now? In Skyrim's moment of triumph, just before we cast off the yoke of Imperial rule?"
Madena: "Yes, that's exactly what I'm asking. I'm not a Nord, I'm a Breton, and I have no wish to fight this war."
Skald the Elder: "I don't think so, Madena. There will be no deserters in this hold, and that's final."

Skald the Elder: "Madena, can we count on your spells to assist us in this war? The Empire is bound to bring their battlemages against us."
Madena: "I told you before, Skald, I have no interest in taking sides in this war. I've no desire to be killed."
Skald the Elder: "What good is a court mage if she refuses to fight? Where's your sense of duty?"
Madena: "When I came here, my only duties were to cure crop diseases and occasionally light a bonfire on holidays. I didn't sign up to kill."
Skald the Elder: "Fine, but this isn't over Madena. We'll talk again."

Should the Empire take The Pale, however, Madena will be much more willing to help the new jarl, Brina Merilis.

Horik Halfhand: "I want you to know I don't trust you, Madena. And I'll be watching you."
Madena: "I'll tell you the same thing I told Skald. I'm here to help the people of Dawnstar, not play politics. Point your suspicions of treachery elsewhere."
Horik Halfhand: "So you say. We'll see if that's true when the Stormcloaks make their move."
Madena: "Well, at the first sign of battle I'll be comfortably sitting in my room, waiting for it to end, so don't you worry."

You may overhear Madena offering to help Horik with his chronic pain.

Madena: "I've seen you walking with a bit of pain sometimes, Horik."
Horik Halfhand: "I'm fine, Madena."
Madena: "I know old men sometimes have pains in their legs when they rise from bed. I know a few spells that could help."
Horik Halfhand: "I said I'm fine, Madena. I won't have some court mage fixing me up like some magical experiment."
Madena: "Still suspicious of me. Well, don't say I never offered."