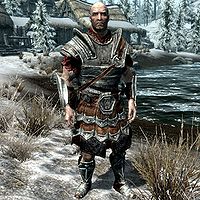 Horik Halfhand, a Nord warrior, is a retired Legionnaire, and is undyingly loyal to his former commander, Brina Merilis, even after retirement. He proudly dons his old Legion armor despite the displeasure it causes Skald, the Stormcloak-allied Jarl of the Pale. When you first arrive in Dawnstar, you will find Horik accompanying Brina while she argues with Jarl Skald. After the argument, the three will return to their normal schedules. Horik wakes up at 8am to eat breakfast with Brina. He then leaves the house and follows her around town, pausing at noon and 6pm for one-hour meals. At 8pm they return to her house and spend some time there before going to bed at midnight.

Horik wears a set of Imperial armor, complete with boots, bracers, and a shield. In combat he wields an Imperial sword. He also carries clothes, the key to Brina's house, and a selection of middle-class items and gold.

When you are near him, he will tell you about what he does. Aside from his three greetings, Horik keeps much of his personal history to himself.

"My duty is to guard Brina Merilis."
"Watch your hands around the Legate."
"I've been in the Legion all my life. I'm content to serve."

At Brina's house, you can overhear Brina asking him about his past, while he says that there is nothing to tell: he grew up on a farm, was orphaned at a young age, joined the Legion when he came of age, and has been with her ever since.

Brina Merilis: "You never talk much about yourself, do you Horik? I swear, these past 30 years you've been at my side, and I think I barely know you."
Horik Halfhand: "What's to say? I was born on a farm, joined the Legion when I came of age, and I've served you ever since."
Brina Merilis: "What about your family? There must have been someone waiting for you back at the farm. Wondering if you were ever coming home?"
Horik Halfhand: "No. Can't say there was. My parents died when I was young. You and the Legion have been my only family since."
Brina Merilis: "I see. You're a good soldier, Horik. I'm sorry for intruding."
Horik Halfhand: "You weren't. There's just not much to it."

After patrolling Dawnstar for the day, he and Brina will often converse in their house. 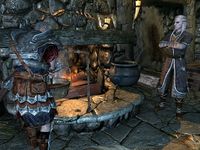 "Are you all right? You seem tired."

Should Brina be appointed as Jarl of the Pale through the course of the quest Reunification of Skyrim or Season Unending, Horik will become her housecarl and take his new position very seriously. Brina will also comment, "You should see the grin on Horik's face now that we're in charge. I know he hides it, but I can tell." He will also show more formality to Brina as their responsibilities change: 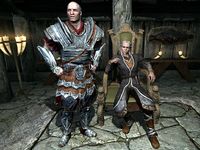 "No one is getting through us."

Horik and Brina will occasionally talk about the ongoing civil war.

As housecarl, Horik is also notably more assertive than before, as he will openly show suspicion towards the court mage, Madena.

Horik Halfhand: "I want you to know I don't trust you, Madena. And I'll be watching you."
Madena: "I'll tell you the same thing I told Skald. I'm here to help the people of Dawnstar, not play politics. Point your suspicions of treachery elsewhere."
Horik Halfhand: "So you say. We'll see if that's true when the Stormcloaks make their move."
Madena: "Well, at the first sign of battle I'll be comfortably sitting in my room, waiting for it to end, so don't you worry."

You may overhear Madena offering to help Horik with his chronic pain.

Madena: "I've seen you walking with a bit of pain sometimes, Horik."
Horik Halfhand: "I'm fine, Madena."
Madena: "I know old men sometimes have pains in their legs when they rise from bed. I know a few spells that could help."
Horik Halfhand: "I said I'm fine, Madena. I won't have some court mage fixing me up like some magical experiment."
Madena: "Still suspicious of me. Well, don't say I never offered."