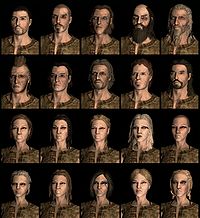 A compilation of the preset Breton faces available in Skyrim

Illustration of a typical Breton male

Bretons are the human descendants of the Aldmeri-Nedic Manmer of the Merethic Era and are now the inhabitants of the province of High Rock. They are united in culture and language, even though they are divided politically, for High Rock is a fractious region. Bretons make up the peasantry, soldiery, and magical elite of the feudal kingdoms that compete for power. Many are capable mages with innate resistance to magicka. They are known for a proficiency in abstract thinking and unique customs. Bretons appear, by and large, much like other pale-skinned humans. They are usually slight of build and not as muscular as Nords or Redguards. The great diversity in their appearance is to be expected from their politically fractured society, though their clothes, accents, customs and names are fairly uniform.

In addition to their quick and perceptive grasp of spellcraft, even the humblest of High Rock's Bretons can boast a resistance to magic. Bretons can call upon the Dragonskin power to absorb spells.

Bretons are particularly skilled in Conjuration, which means that they can summon creatures and weapons to aid them in battle. They are resistant to magic, making them exceptionally useful against other magic users.

It should be noted that Bretons do not have any bonuses to Destruction magic, giving the player a fairer choice between using offensive magic or weapons; Breton skill bonuses are well suited for support magic.

Many Court Wizards are Bretons. Also, numerous members of the College of Winterhold are Bretons. Bretons are especially common throughout The Reach. They frequently make appearances in a variety of roles, from traders to battlemages.