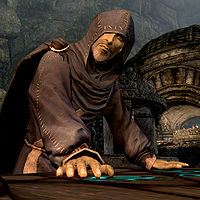 Court Wizards are the jarls' personal mages who research and study magic. They can usually be found in the jarl's palace or longhouse. They sell a variety of spells from all of the schools of magic, and other items that are of use to mages, including soul gems and scrolls. Their selection of available spells and magical items are bested only by the mages at the College of Winterhold.

In court politics they are the equals of housecarls, except on magical matters, but less important than stewards. They are usually left alone by their jarl due to the Nords' suspicion and distrust of all things magical. They are also the only members of court that do not have to relocate if their hold changes sides in the civil war.

The following people are court wizards: