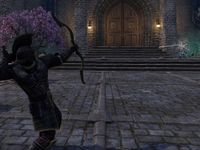 Scatter Shot deals Physical Damage to the target and knocks them back 6 meters, stunning them. This is a good way of keeping melee-based enemies away from you so that you can avoid getting swarmed. It has a fairly small range (the smallest of all the Bow skills), so it mostly serves as an emergency measure, as you should on principle not be allowing enemies to get that close to you while using a bow. The Magnum Shot morph is useful if more than one enemy is getting to close, as it pushes you back as well. Alternatively, Draining Shot will restore your Health when the disorientation ends.

1.2.3
* Magnum Shot: This ability's animation no longer breaks if used while silenced or bracing.
2.3.5
* Adjusted the rank progression for this morph so it reduces the cost of the ability at a smoother curve.
2.4.5
* Draining Shot: Redesigned this morph so it now heals you when the disorient ends.
2.7.5
* Adjusted the order of the Active Abilities in this skill line. They now unlock in the following order:
3.2.5
* This ability and its morphs no longer apply a 5-second disorient to enemies hit. Instead, they now apply a 1.5 second stun.
3.2.7
* Fixed an issue where the tooltip text on this ability and its morphs were incorrectly referring to their stun effect as a disorient.
4.1.5
* Fixed an issue where using Roll Dodge immediately after casting this ability or its morphs would prevent the enemy from gaining crowd control immunity after you knocked them back.
4.2.5
* Increased the range of this ability and its morphs to 28 meters from 10 meters.
4.3.5
* Fixed an issue where the stun applied from this ability and its morphs was not able to be broken until after the knock back had completed, which made it feel less responsive to CC break.
5.1.5
* This ability is now part of the utility category, with the below changes affect all 3 versions of the ability.
5.2.5
* Draining Shot (morph):
Retrieved from "https://en.uesp.net/w/index.php?title=Online:Scatter_Shot&oldid=2697490"