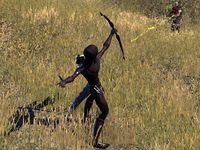 Poison Arrow deals poison damage to a target, and additional damage over time. It can be a very effective attack on single targets, especially when combined with other abilities. The Poison Injection morph makes it particularly effective as an execution spell, as it is more effective when your target is at low health. Alternatively, the Venom Arrow morph interrupts and stuns spellcasting a spellcasting enemy.