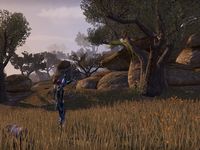 Snipe deals a large amount of Physical Damage to one target. In addition to being the highest damage ability in the Bow line, it is one of the longest ranged attacks of any Skill line. The Focused Aim morph allows other Bow attacks to have a greater range as well, in addition to a reduction in the target's armor. Alternatively, the Lethal Arrow morph adds a Poison Damage over time to the attack, and decreases the effectiveness of Healing on the target.