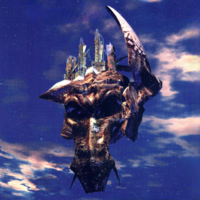 The Battlespire was the magical war academy of the Imperial Battlemages, and a testing facility for candidates seeking to join the Imperial Guard.[1] It was (and its ruins remain)[2] located in a Slipstream Realm deep in Aetherius[3]. As the mortal mind can be driven to madness by Oblivion, these sorts of realms are useful as they allow the mind to acclimate to the contradictory nature of the outer realms without the same levels of mental strain.[4] More simply, it was possible to access numerous realms of Oblivion from the Spire through the use of teleportals and voidgates.[1] The facility was moored in place by five great Anchors, which assured its safety and stability in the surrounding flux.[5] Access to the edifice was granted via the Pillar of Light, a teleportation device linked to the Weir Gate.[6]

Though the date of the construction of the Battlespire Academy remains obscure,[4] the Weir Gate was known to exist as of 2E 582.[7] The institution was accepting recruits by the time of the Third Empire in 2E 864.[8] During the Imperial Simulacrum, Sirran Angada tricked Paxti Bittor into betraying the Battlespire to the legions of the Daedric Prince Mehrunes Dagon.[1][9] A pair of trainees became trapped inside; one was captured by Mehrunes Dagon, but the other apprentice followed the trail through numerous Daedric gates to Dagon's citadel, where, by stating his protonymic, they cast the Daedric Prince into Oblivion. Having lost Dagon's support, Jagar Tharn's plot to supplant the true Emperor was doomed to fail.[9]

The Battlespire was partly destroyed during the invasion's aftermath. The invaders were known to wield Daedric Crescents, and succeeded in slaughtering most of those inside.[1] The Empire later reclaimed the ruined Battlespire, and gathered up all the Daedric Crescents to be destroyed, bar one.

The Battlespire is administered and maintained by five powerful battlemages, with the five in 3E 398[10] being:

The Emperor also has a personal liaison to the Battlespire, with the title of this position being the Imperial Secretary. Lomegan Marie held this position circa 3E 398.[11]

Some of the Battlemages, including the ones above known to have been at the Battlespire during its invasion, are:

The Battlespire consists of many notable locations, with a lot of these relating to the daily function of the college, for example, the High Court Room. The Battlespire also contained a large room for dragons such as Dragonne Papré. 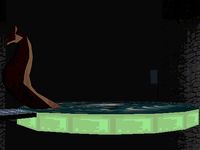 Aside from the Weir Gate itself, the only access to the colleges was via the Star Galley, a magic boat which could navigate the surrounding environs.[1][12] The vessel was constructed by Battlemage and Artificer Clarentavious Valisious,[13] and was kept in the Star Galley Crib near the Weir Gate, though access was normally restricted.[14]

This section of the facility is also notable for being the home of the gigantic Mock Turtle.

The High Halls and LibrariumEdit

The upper sections of the Battlespire consist of the war college itself. Here are found dormitories, mess halls, libraries, lecture halls, an infirmary. Other areas found here are the Great Hall, the Conjury Hall and the Summoning Hall.

Of particular importance was the voidgate. This device, powered by artifacts known as voidguides, allowed passage to Oblivion. The Soul Cairn was accessed in this manner during Mehrunes Dagon's invasion, but it is not known which other realms the voidgate was able to reach.[1]

Several realms of Oblivion were known to be accessible from the Battlespire or from each other. These include the Soul Cairn, Shade Perilous, the Chimera of Desolation, the Havoc Wellhead, and Dagon's Hunting Lodge in the Deadlands.