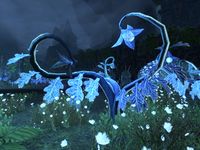 Darkshade Glowstalks can be found in Darkshade Caverns in Deshaan. They are bioluminescent and move in a tentacle like motion.

The Deathbell is a tall plant with large inverted bluish-purple blooms found in throughout the Drajkmyr Marsh of Hjaalmarch. They are commonly used to create poisons, but are widely known across their native province, Skyrim for several folktales regarding death. One such story is that they grow where an unfortunate death has taken place. Another story entails that it grows normally and attracts unsuspecting travelers and animals to their doom. While there has been no known proof of these myths actually happening, the Deathbell is seldom found but using its petals in mixtures can surely increase one's alchemic abilities.[1]

In the early-First Era, the Dragon Priest of Forelhost, Rahgot had a large garden of Deathbell and ordered his head-alchemist to make poison for his entire cult to consume, before their stronghold was completely sacked.[2] Worshippers of Peryite use deathbell among other things to create an incense that allows them to commute with their Daedra Lord.[3] 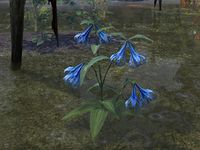 A blue flower from Murkmire that grows where the dead lie. They have been seen prominently around the ruins of Bok-Xul. 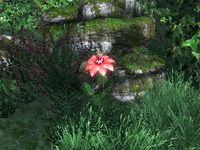 Domica Redwort is a herb grown for their beautiful and showy flowers. They attain a height of about three feet and have feathery leaves; the flowers are usually bright red. In addition to their beauty, they are said to have magical abilities to enhance the appearance of anyone who carries or wears one of the flowers. Commonly grown in Valenwood, wild Redwort may also be found in Cyrodiil, where it grows primarily in the West Weald, with sparse occurrences in the Blackwood region and along the Panther River. Attempts were made in the Second Era to transplant it in the Summerset Isles.

The Douad Shrub has black branches that is used for decoration in the gardens of the Blue Palace in Solitude.[4] 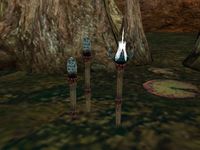 Ampoule Pods on the left, Coda Flower on the right

The primitive Draggle Tail reeds are found in the swamps of the Bitter Coast region of Vvardenfell. The immature state of the plant's fruiting body are called ampoule pods, which bloom into the luminescent coda flower. Draggle Tails are prized by alchemists for their modest magical properties.

Dragon Scale Mushrooms are exotic mushrooms found in Deshaan that are known for their magical essence. When combined with Kyne's Heart Healing Herbs and Sour Milk Tea, this fungus can be used to create a cure for the infamous Llodos Plague, which ravaged Deshaan during the Interregnum. 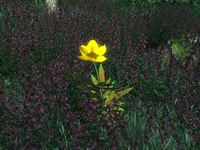 The Dragon's Tongue is the common name for a fern-like herb that can be found across the provinces, but ideally they can be found in the Ultherus Swamp in Black Marsh[5] and the Dragon's Teeth Mountains, in the vicinity of Fang Lair in Hammerfell.[6] It is a wildflower, whose name comes from the fiery-red fronds that protect the golden bloom. But despite its exotic look, it contains a deadly poison that is strong on touch against many people, however, it is said that Argonians are able to harvest them and use their sap to enhance their endurance.[5] Powdered Dragon's Tongue is used in desert travel to prevent chafing.[7] The Dragon's Tongue can also be found in the province of Cyrodiil, sparsely in the West Weald and in pockets across the Lower Niben and the Panther River. It can also be found in Skyrim, specifically in Eastmarch. 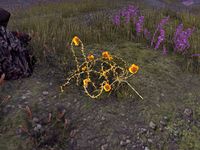 Dragonthorn is a fairly small thorny bush with bright yellow flowers sprouting across its long tangled stem that can be found growing across Tamriel. The Bright-Throat Tribe of Murkmire once believed that chewing Dragonthorn leaves helps the body prepare healthy eggs during bonding season.[8] 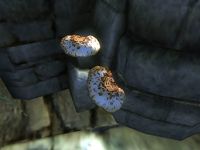 The Dryad's Saddle Polypore is a white, brown mottled shelf mushroom that is found in only a few select locations throughout Cyrodiil.

A rare flower found near the town of Hoarfrost Downs, in the region of Rivenspire in High Rock.[9] Some people are known to be allergic to the flower.[10] The flower shares its name with the village of Dunlain Falls. 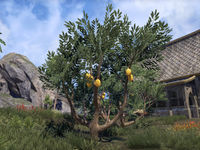 A variety of fruit-bearing tree which can be found growing in Southern Elsweyr. The fruit can be consumed and is used in cooking.[11]

A species of lichen found in Wrothgar that smells kind of like mint. Named so because they are spread around when Durzogs migrate, because the seeds get stuck between the beasts' toes. [12]

A rare mushroom that grows in caves and ruins. They have a variety of culinary uses and are said to taste flavorful and meaty.[13]