Once you have learned about the existence of the Thieves Guild, travel to the Garden of Dareloth and wait until midnight.

You will discover that three people have arrived in the garden. One is Armand Christophe, local Thieves Guild doyen, the other two are your fellow guild candidates, Amusei, an Argonian, and Methredhel, a Bosmer.

The Race for the DiaryEdit

Armand will inform you that in order to join the Thieves Guild, a simple competition will be conducted. You are to steal a diary from Amantius Allectus, and the first thief to retrieve the diary and return it to him will be inducted into the Guild.

Armand will only indicate that Amantius is located somewhere in the Imperial City, but that the local beggars might be able to tell you where his house is located. Amusei may loudly say that Amantius may live in the Elven Gardens District, but this is not true, so do not listen to him.

Once you have commenced the quest, Methredhel will begin to run towards the Imperial City – she appears to already know the target's location. You can opt to follow her, however she is quite fast and depending on your current level and speed you may lose her quickly.

By asking any of the Imperial City beggars (after a five-coin bribe), you will gain the information that Amantius lives in the far east side of the Temple District. The easiest beggar to query is Puny Ancus who is conveniently located just outside the Garden of Dareloth, directly behind Methredhel's shack. If his disposition toward you is high enough, he will tell you for free. 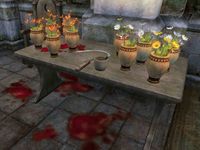 With the location of Amantius' house confirmed, make your way to the Imperial City Temple District and enter the house.

You will generally find Methredhel already inside and sneaking around looking for the diary. As long as you head straight for the desk containing the diary quickly you should be able to obtain the diary before she does.

If you enter Amantius' house and Methredhel has beaten you and removed the diary already, you will be informed of this by a quest message. You will also be given a tip via the message that you will be able to steal the diary back from Methredhel (because neither you nor Methredhel is a member of the Guild yet, it's not considered a violation of Guild rules).

Methredhel will return to her shack in the Waterfront District and place the diary in a locked chest - where you can steal it while she sleeps. You may encounter Adanrel or Carwen awake inside which makes sneaking open her chest somewhat more difficult. You can choose to wait until the early evening, around 6pm, before attempting to steal the diary as Methredhel will be away from her shack for dinner. After 12-36 hours (a noon and then a midnight has passed since the diary was placed in the chest), she will retrieve the diary to deliver it to Armand. Alternatively, you can simply pick-pocket the diary from Methredhel on her way back home.

Welcome to the Thieves GuildEdit

Return the diary at midnight to Armand in the Garden of Dareloth, and you'll have officially joined the Thieves Guild! If you complete the quest by giving Armand the diary, you will receive 1 Infamy point.

If you do not manage to retrieve the diary and return it to Armand, you still have a chance at entering the Thieves Guild via a second thieving mission. Armand will instruct you to steal a sword from the shop A Fighting Chance, located in the Market District. Armand tells you that "Amusei is a bungler and won't get this offer," so there is no need to worry about competition this time around. Make sure you have lockpicks because you will need to break in some doors.

If you are attempting the theft at night, Rohssan is sleeping in her private quarters, so a sneak attack on the dog is best to prevent it from alerting her to your presence. Breaking into her quarters during the day while Rohssan is tending the shop is also an option, just ensure that you are successfully sneaking on the stairs when you pick the lock.

Return to Armand with the sword to become a member of the Thieves Guild and receive 2 Infamy points.

Killing either of the following NPCs while this quest is active will require you to pay a blood price to Armand: