This article documents the many beliefs regarding the mortal condition, afterlife and funerary customs found around the various cultures of Tamriel. 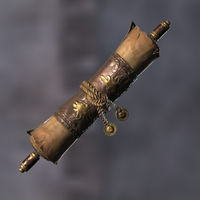 A Scroll of Revival 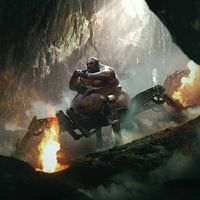 There are many ways for mortals to avoid death, although usually at a price. Most forms of undead are simple revenants, such as mindless skeletons or zombies. Restless spirits often remain bound to Tamriel as ghosts or wraiths.

The most powerful mages have been known to live far beyond a normal mortal lifespan.[1] The most famous examples are the Wizard-Lords of Great House Telvanni, who have been known to live for millennia.[2] Sotha Sil, Vivec and Almalexia were able to extend their lives through the continued use of the Heart of Lorkhan; the heart's power also allowed Dagoth Ur to resurrect himself from the dead.[3][4] A Breton wizard of legend known as The Sage is also known to have achieved immortality via alchemy.[5]

Necromancers often attempt to use their knowledge to cheat death, although only the most powerful of necromancers manage to ascend to lichdom,[6] which often becomes a curse in very short order for those who succeed.[7] Another way mortals avoid a natural death is contracting vampirism. Lord Harkon sacrificed a thousand innocents in Molag Bal's name so he would be given the "gift".[8]

The corprus disease gives those afflicted with it immortality, but it also destroys the victims' minds, and deforms their bodies. Only two people have ever really benefited from this type of immortality without losing their minds to the disease: the last living Dwemer Yagrum Bagarn, who was grotesquely deformed by the disease, but had the benefit of having most of his insanity caused by Corprus removed due to treatments used by Divayth Fyr, allowing for him to remain lucid, and the Nerevarine, who was partially cured of corprus disease, while also retaining all the positive effects of the disease.[9][10]

During the Merethic Era, Dragon Priests kept the Nord population enthralled and obedient by means of a widespread dragon-worshipping cult, and many people of this era became the undead draugr that still prowl the crypts of Skyrim, Solstheim, Atmora, and anywhere else the dragon priests "kept peace between dragons and men".[11][12]

Some mortals have been known to achieve a form of life beyond death by having their soul replaced by a Daedric vestige.[13] Molag Bal preserves mortals who have been sacrificed to him in such a manner.[13] Additionally, he has often been known to bring mortals back from the dead.[14][15] On rare occasions, mortals have become immortal by achieving divinity, such as the god Talos.[16]

The Purified are beings that have been lustrated for purification by the Daedric Prince Meridia. For mortals, this usually involves being stripped of their will and bestowed with the gift of immortality for the purpose of serving her for all eternity. Beings who join the ranks of the Purified include those who willingly pledge themselves to Meridia's service,[17] as well the unwilling[18], such as those who defy her.[18][19][20]

There are other, simpler ways to avoid death, such as through the use of an enchanted scroll of revival at the moment of death.[21]