This is a radiant quest which you can receive from either Brunwulf Free-Winter or Ulfric Stormcloak, whichever is the jarl of Eastmarch. The jarl lives in the Palace of the Kings in Windhelm.

This is an umbrella quest, involving several other quests that must be completed if you wish to become Thane of Eastmarch. You will have to capture Falkreath for the Stormcloaks (if you joined the Stormcloaks) or complete the Battle for Windhelm (if you sided with the Imperials) before this quest becomes available. Once you have completed the prerequisite, speak with the jarl again and he will ask you to assist the people of the hold. You must assist five people in the hold, usually by completing favor quests for them. Note that many of the quest givers are non-essential NPCs, so their deaths would result in a loss of potential quests to complete. If they die after you assist them, they still count towards your Thane status. Also, you can befriend merchants if you have the Investor perk by investing in their stores.

You must also purchase Hjerim, which costs 8,000 to 12,000 gold. Simply purchasing it is enough; there is no requirement to decorate, although it becomes more useful if decorated. Note that it cannot be decorated unless you have completed Blood on the Ice, and if you have not started that quest yet you should start it before entering Hjerim.

Highlighted quests can be easily completed without any skill use. If any citizen offers multiple favour quests, only the first completed one will count towards Thaneship.

Investing 500 gold in certain stores will count towards Thaneship if you have not befriended the store's owner by other means. If the original owner dies and you had already invested in their store, you [can / cannot [verification needed]] also befriend their replacement.

The following quests also increase the disposition of citizens of Eastmarch, and therefore count towards this objective: 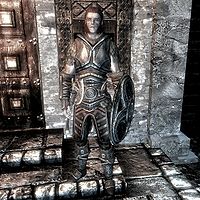 How can I serve you, my Thane?

After helping five inhabitants and purchasing Hjerim, the journal tells you to return to the jarl. The reward, the Axe of Eastmarch, is a random, leveled, enchanted axe. There is a 50% chance that it will be a war axe (one-handed), and a 50% chance it will be a battleaxe (two-handed). You will also receive a housecarl named Calder, who will be waiting for you at Hjerim.