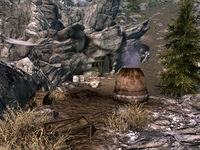 The entrance to Steamscorch Mine

Steamscorch Mine is a small mine in the northeast of Kynesgrove with seven malachite veins, and a smelter near the entrance. It is located on a path north and east of the Braidwood Inn. Like the Goldenrock Mine at Darkwater Crossing, Steamscorch does not have its own waypoint.

North of the inn is a small path passing an encampment that leads up a hill to the entrance of the mine. There are no other hostiles in or around the mine, making it a safe place for lower level characters. Kjeld will buy malachite ore from you.

After Dragon Rising, dragons can be frequently found flying overhead. The mine path continues onward to a dragon burial mound east of Kynesgrove (related to the quest A Blade in the Dark).

To the north of the inn and west of the entrance to the mine is a camp for the miners. It consists of a central campfire around which are three small tents, each containing an unowned bed roll. North of the fire are two food barrels with a rack holding nine owned salmon. Northeast of the fire is a vegetable patch where ten cabbages, four gourds, six leeks, and eight potatoes grow. There are a tanning rack and a wood chopping block on the fringe of the camp and a grindstone by the northwestern corner of Braidwood Inn. A nightshade plant and a snowberry bush can be found around the camp. 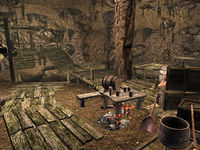 Inside the mine are seven malachite ore veins (

) and twenty-one patches of fly amanita. The first two veins are just inside the mine on either side of the main path, with an empty chest on the right of the tunnel; the other five veins are deeper in. The tunnel opens up to a small area with a table at (A), holding a copy of the Enchanting skill book Catalogue of Armor Enchantments, a bottle of wine, and a random healing potion. A pair of random boots can be found lying on the ground by the table. The mine then splits into two parallel tunnels, both of which lead to the area at the end. The left tunnel contains another table with several food barrels and sacks as well as a pair of leather boots, while the right tunnel leads to a side tunnel containing an ore vein. The remaining ore veins are all in the area at the end of the tunnels; two of the veins are on the ground, and two more are accessible by climbing the scaffolding in the area.

The mine is worked by a few NPCs and is often patrolled by Dravynea the Stoneweaver, a Dunmer mage. She resides at the nearby inn and offers a miscellaneous quest to bring her frost salts in return for training in the school of Alteration. Dravynea also states it is her job to keep the mine safe and prevent it from collapsing.