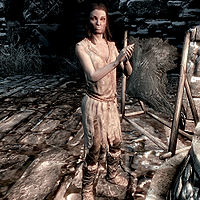 Silda the Unseen warming her hands

Silda the Unseen is a Nord thief living as a beggar in Windhelm. She is an expert trainer for the Pickpocket skill. Due to her life on the street, she is also one of three persons present when the Butcher strikes again during Blood on the Ice.

She lives her entire life walking the streets of snowy Windhelm, at all times trying to get a septim from the townsfolk or keep warm by the fireplaces scattered around town. At 8am she can be found in front of the Palace of the Kings, at 4pm she stands between the main gate and Candlehearth Hall and at midnight she will head over to the Market and warm her hands at the forge. Once you have met the requirements to trigger Blood on the Ice, she can be found in the graveyard, along with the other witnesses, all of them looking at the dead body of Susanna the Wicked.

She wears typical beggar clothing consisting of ragged robes and ragged boots. She wields an iron dagger and carries a selection of lower class loot and gold.

She has several lines prepared for begging, to either you or the other citizens: "Spare a coin for a poor old woman?", "A few septims for my supper is all I ask.", "I ask only for a little charity.", "Will you spare a few coins to help someone who's got nothing?", "I ain't askin' for much, just a few septims." and "The Divines smile on those who show mercy an' charity." When you talk to her, she will add: "A few septims ain't nothing. You can spare that, can't you?", "Spare a coin for a poor old woman, milord/milady?", "Spare a coin? Talos rewards the generous.", "I hope the wind dies down a bit before tonight. Hard when you've got to sleep outside." If you have yet to complete Blood on the Ice, she will add: "Nervous being alone at night. Especially these days, with the Butcher prowling the streets." When finishing conversation, she will say: "The Divines smile on a charitable soul." or "Don't forget them who's less fortunate than yourself." If you ask her for training she will respond: "Up to no good, are we? I'll teach you, but it'll cost you." Once Blood on the Ice is initiated, Silda will be in the graveyard, and will be shocked: "Another one. Terrible." Unfortunately, she will have little to add to the investigation: "I heard a scream and came running, but she was already... like this... when I got here."